Holy hell. Tonight (and today) has been a whirlwind of emotions. To start things off. High. I think I was smoked out 5x tonight. If we’re being completely honest, I’m trying to get unhigh so I can transcribe this damn interview. Hi.

Trippie Redd has been the talk to the day.  Actually, ever since Day N Night Fest. I caught wind of him because Yung Pinch took me on a golf cart to try to catch his set. All day at work today, Trippie was the topic of convo. But that just means you’re doing the right lmao. It took me until now to realize that. I don’t think I’ve ever experienced a more “If you ain’t got no haters, you ain’t poppin'” moment. Then today with Redd. 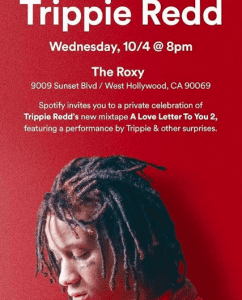 This kid is insane. He’s only fucking 18 years old. And has a mass following. I literally am convinced he’s the next XXXTENTACION. Well, I guess that wouldn’t even work really cause they’re BFF’s. But seriously. Homeboy is lit. I’m having a hard time articulating it into words lmao. He posted this on his IG but I screenshotted because high chance he’s going to delete it lmao. #JournalistProblems. (He did btw).

Tonight was a private show with Spotify. I heard they literally hand selected fans to come. Like, through data and analytics. Mannnn. I can’t handle technology lmao. This was in light of his upcoming mixtape A Love Letter To You 2 dropping in 2 days (October 6). The Roxy– one of my fav venues in LA. Intimate, yet spacious. I pull up to Sunset Blvd a little before 8pm to find die-hard fans lined up all the way down the block, and onto the next street. This kid has a crazy fanbase. And they all looked like him lmao. Like, I saw so many kids with tats on their faces. Their rents let them? Better question: their rents went with them to get them?? Who knows.

Shout out to DJ Amen, Byze, Shannon, Lauren, Surf, Jennie, Milo, and everyone who helped make this interview possible lmao. Swear, Trippie is not the easiest artist to track down. Especially since he doesn’t live in LA. It makes the challenge that much greater. And shout out to Sour Matt for mobbing with me. He’s seriously one of my fucking favorite humans out here.

We walk backstage and up the stairs into a straight hotbox. It was lit. My favorite setting lmao. I felt like all the fucking attention was on us cause there were about 15 of his homies in one room just staring. But it was super lit. I fucked with it. He was just talking about Lil Twist when he walks in the room. That’s the homie. Gang gang.

Shout out to DJ Carisma fucking dropping all the slaps lmao. “Boss” by Lil Pump, holy shit. I forgot how hard that song goes. And then Amen getting on the mic. Not that the fans need to be hyped any more than they were, but real recognize real. The minute Trippie gets on stage it was game over. “Bust Down” is his latest single and it was fucking unreal lmao. He shut down The Roxy fr fr.

Honestly reminded me of XXX’s show at The Novo. At only 18, I can’t even imagine where this kid is headed after this. Side note, him and his girlfriend literally are attached at the hip lmao. She was def on stage tonight.

I literally watched “Rack City/Love Scars 2” the night prior while I was researching this kid. Trippie can fucking sing. He’s talented af. I was so convinced during his entire set. Officially a fan. Fuck the rest.

He kept putting on for 14, 1300, and “free Rocket.” I’m assuming that’s a homie in jail or something. “Poles 1469” got me too. I had to ask his manager the name of this song because it was so fire. Lyrics and everything.

And then I had to feed my meter lmao. Fuck West Hollywood. He played us a bunch of new music on my way out. Trippie Redd, I fucks with you. 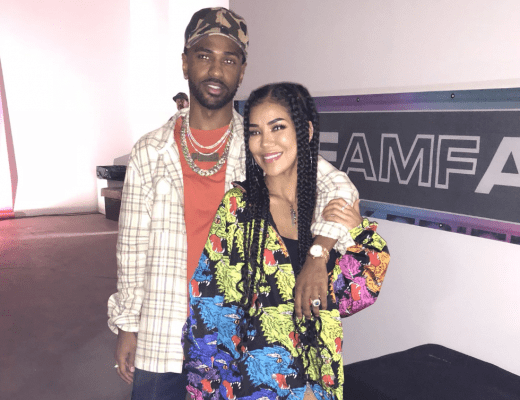