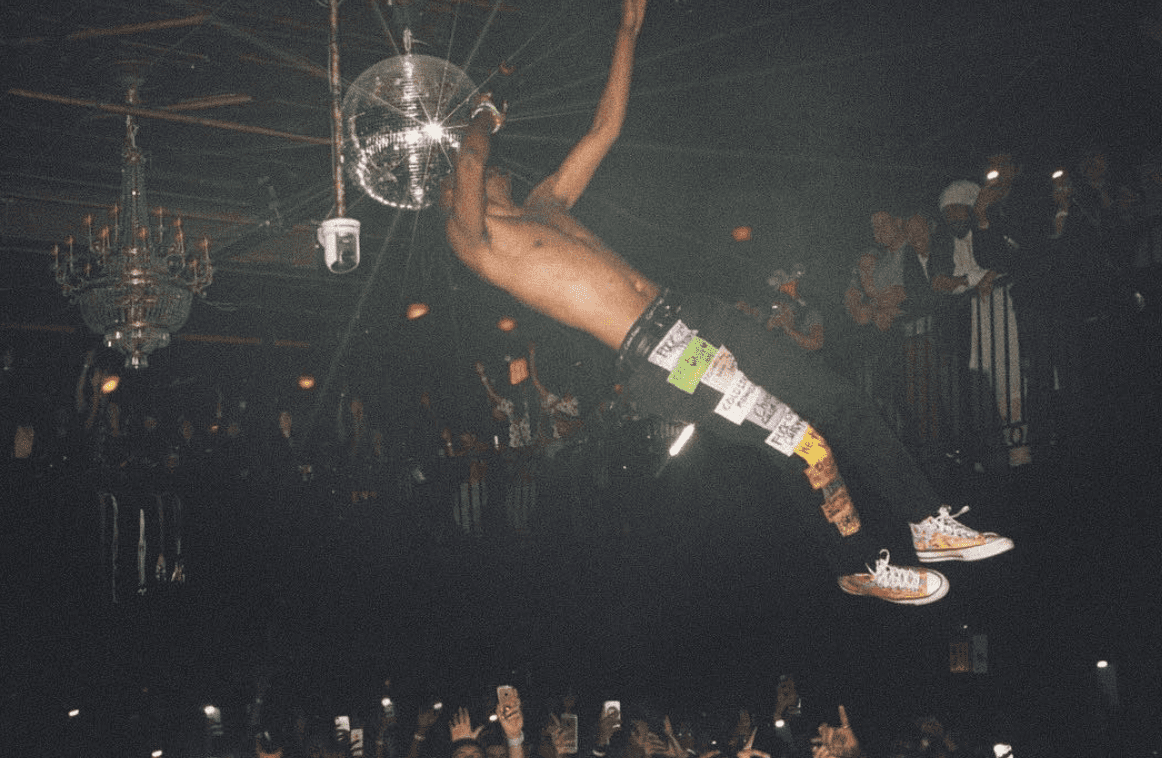 Happy Thursday. November is flying by and it’s really tripping me out. Last night, I had a bit of a hard time dealing with the death of Lil Peep. That really struck a chord with me and left me numb for the rest of the evening. I send my condolences to Peep’s family and all those who knew him. On a lighter note, this video of Swizz Beatz graduating Harvard’s honestly gave me chills. So admirable to go back to school at this point in his life. So inspiring.

Fast forward through the work day, tonight was my babygirl Monica‘s event with Irv Gotti for his BET Tales season finale screening. I don’t even know where to go begin. For one, huge shout out to Mon, Blake and Popular Demand because they throw the absolute best events (parties, if you will). It’s always such a good time. Free drank, free food, a DJ dropping all the slaps, a photo booth, a basketball hoop, and only the best company.

I’ve been to this amazing Times10 building 3x now, and absolutely obsessed with it. It’s PERFECT for functions like this. Also was pumped this was in Burbank lmao I head over right after I got off. Doors had barely opened and it was already crackin’ inside. That never happens. I was actually super looking forward to shooting hoops on their indoor basketball hoop, but this was cockblocked by the DJ, who was set up right underneath. I got over it real quick because he was dropping nothing but bangers. Huge thanks to Mon, again, for the invite. Any chance to hang out with my Asian sista is a win.

So what is TALES? A Hip Hop anthology series that weaves classic Hip Hop songs into captivating visual narratives in a way TV has never seen before. Basically, it goes above and beyond your average music video. I honestly can never forget what happened last time. This is the saddest story. I was invited to the actual premiere of this show on BET, where I got the opportunity to speak with Irv Gotti. This took place at the glorious DGA building… where Irv ending up cursing me out. I shamefully asked him about 50 Cent (#HipHopbeef) and he did not take it well. It was his birthday too. I was honestly traumatized by it all. Monica knows lmao. I didn’t get to chance to speak to him tonight, although I was so ready to redeem myself.

As the night went on, more and more people showed up, filling up the entire space. This cotton candy station really had me trippin’. Not only did you get to choose flavors, but they topped it with edible glitter so it literally glistened in the light. I was literally standing right there just basking in the delicious aroma. Was so here for it (s/o Twisted Cotton Candy). That was only the beginning. On top of the open bar stocked with quality liquor, there were tables of grilled cheese (s/o cheezus_la), fried chicken sliders, and pasta in a bowl. All of these food items were such a hit, they ran out. No joke, everyone literally ate everything lmao. Also huge shout out to Party On Demand. They were the other superstars of the evening. All the bases were covered tonight.

They decided to do the Q&A before the screening, which I was super happy about because I, unfortunately, couldn’t stay. Blake first introduced Irv Gotti and told everyone the story about how they met 2 years ago. It was then that Irv told Blake he was thinking about making a show of songs. Fast forward to today, Blake watched Irv Gotti every step of the way, which included signing the deal with BET. Super inspirational. Btw, Irv Gotti is the co-founder of Murder Inc. Records. He’s a legend in Hip Hop.

Shout out to DJ Damage moderating (now that I think about it, he definitely moderated the last one). Irv Gotti was asked how he chose the songs for each episode, revealing that tonight’s season finale featured Method Man and Mary J. Blige’s “All I Need.” That might be one of the best collabs to date. Period. Irv also spoke on recently expanding the show to Tidal, giving them the raw, uncut content (since BET is PG-13). In speaking on his relationship with JAY-Z, Irv shamelessly let everyone know how quick JAY was to co-sign Irv. Hov said something along the lines of: “I’m going to do whatever Gotti does. Because when he’s on his creative shit, get out his way.” Again, so damn inspiring.

And it doesn’t end there. Irv spoke on Season 2 of TALES and how he wanted to expand it to more current Hip Hop songs. He gave the example of “Slippery” by Migos, which had the crowd cheering and applauding. Shit, I love that song too lmao. He also mentioned linking with Cardi B and doing her “Bodak Yellow.” She asked him what it would be about and he answered: her story. That would be so epic. Entertainment in its purest form. At this point, I had to sneak out. I was sad to miss the screening, as Times10 comes equipped with an in-house luxurious theater. They streamed the Mayweather fight here. It was too perfect.

Tonight. The long-awaited, highly-anticipated Aminé show at The NOVO in downtown LA. All too familiar territory, I couldn’t miss this one. Aminé is the definition of an artist who proved to the world he’s not a one-hit wonder. “Caroline” had everyone asking who this guy was. Homeboy hails from Portland, Oregon, which (to me) is so fitting to his personality. I remember seeing him perform at The Echo just as he was popping off. I went into that show still fucking up his name (I could not stop calling him anime). He ended up bringing out Madeintyo and Kehlani that night. We were shocked. Fast forward to today, and he’s got Issa Rae in his “Spice Girl” music video. Too lit.

His 9:30pm set time soon turned into 10pm, which gave me anxiety because I had so much work to do. Today was one of those 14+ hours days. But luckily I was in good company. Shout out to Asha and Jarrett for the good vibes. Jarrett actually pointed out Issa Rae in the VIP section and I had to say hi. Don’t think there’s a single soul on earth that can discredit that woman. While she’s the star of Insecure, she’s just as amazing IRL. We were all so ready for Aminé to come out. This tour is in light of his debut album Good For You, which I have nothing but praise for. Every single song is great. Aminé is great.

The curtain finally draws back, revealing a super cute stage with the words “Good For You” in the backdrop. Shout out to the full band on stage also, killing it. The show is intro-ed by a voice in the speakers laying down the ground rules. I didn’t have the attention span to decipher each one, but I think they all translated to “have a great time” lmao. He starts the show off with an explosive “Baba,” which is his second single off Republic Records. Speaking of, huge thanks to Matt for allowing me to cover. He’s the best. “Baba” means daddy in Amharic/Arabic. The crowd loved it.

“Veggies” featuring Ty Dolla $ign was next, the intro track to Good For You. At this point, I look up at the balcony to see every single seat filled. Aminé successfully sold this bitch out. Always makes me so happy to see. No one was ready for him to cover TLC’s “No Scrubs” next. No one. And let’s not forget his outfit. Homeboy is a character, which was also reflected in the red face paint across his eyes. His extremely loud outfit included his tour pants, where he adds a patch for each city he’s in. LA was one of the last stops.

Next was “Heebiejeebies” featuring Kehlani, the closing track on the album. Any feature with Kehlani catches my eye, so this is without a question became one of my favorites. He also shouted out the producer, Jahaan Sweet, in the building (Yay areaaaaa). Next, Aminé asked how many in the room couldn’t pronounce his name in the beginning, in which everybody’s hand shot up. I loved that. Loved that he could address the elephant in the room. He then asks for respect, smoothly transitioning into “Hero.” This had everybody singing along. Next was “STFU,” which had everybody chanting “Shut the fuck up!”

“Yellow” featuring Nelly was the first full-length video I took, but had to delete due to my storage being full. SMH. Top 10 worst feelings in the world. Aminé slowed it down with “Sundays” and “Dakota.” In this moment, I couldn’t help but notice how theatrical he was. His stage presence was perfect and went hand in hand with his entire brand. “Beach Boy” was next, in which he shouts out Cali and all the beautiful beaches that come with it. “Slide” was epic. He full-on admits he used to be a fuckboy. Was low key proud I caught that moment in the 15-second IG story.

“Turf,” “Blinds,” and “Money.” Every song somehow sounded better than the next. But this was the peak for me: “REDMERCEDES.” Banger alert! This beat slaps so hard.

bro @heyamine was going so hyphy on stage to “redmercedes” coulda sworn he was from the bay 👐🏾 pic.twitter.com/WWSTZT745c

I dead ass felt like Aminé was from the Bay in this moment. He was going stupid, dumb, hyphy. So epic. Next, he brought everyone’s attention to his tour pants, in which he asked one person from the crowd to come on stage and write on the patch for Los Angeles. This took a little bit of time, but it was extremely interactive with the fans. A kid in a Lonzo Ball Lakers jersey eventually hops up there to write “Fuck LA traffic,” although “Kobe” was a close call. Things got a little controversial up there and I couldn’t keep up. But I also didn’t try too hard.

dancing to “spice girl” by @heyamine right next to @IssaRae tonight was low key everything ❤️ pic.twitter.com/RO846DDMSG

“Wedding Crashers” featuring Offset is probably everyone’s favorite. “Spice Girl” was a full-blown party. Do yourself a favor and peep the music video. It’s seriously unlike anything you’ve ever seen (almost at 10 million views). Dancing right in front of Issa Rae had us living life. Pure bliss.

And then he takes it further by throwing it back with the real Spice Girls. I was done.

“Caroline” closed out the evening on the highest note. He had everyone take out their cell phones for this one. It was the definition of lit. So lit, he played it again for an encore.

After tonight @heyamine has to be added to my list “10 best performers I’ve seen this year” list. Too much sauce. S/o @shirju for the experience. 🙏🏽