Happy Thursday. Tonight marks day 1 of NBA All-Star Weekend madness. For me, it was just about making it to the end lmao. “Dedication” by Nipsey Hussle & Kendrick Lamar on repeat.

Thursday’s, I have class. But I cut out early to catch Blac Youngsta at work. (Really hope my professor doesn’t see this lmao). This fool is pure comedy. Like, he’s hilarious. His Memphis accent is so strong and I fucking love it.

This was literally my mood all day. After work, I had 3 stops. I ran into Kevin Wong at the show as we were waiting for our credentials, and he just kept saying: “go to private, exclusive events.” Over and over again. I was like damn, copy that lmao.

The first event was Birdman’s private screening of his new documentary titled Before Anythang – The Cash Money Story. Shout out to Apple Music and Matt for this. This took place at 7pm at my favorite spot in Los Angeles: Neuehouse Hollywood. Dreaming of an office here and putting it into existence. Also, I just love Birdman. I’m a Wayne stan, so by default, I love Bird.

I also knew I had to celebrate Birdman’s birthday with him. Jk. He has no idea who tf I am lmao. But it still felt special sharing some moments with him on his born day. I arrived on time for once, which proved to be too early lmao. Was instructed to go upstairs and found the entire bar space laced with popcorn, movie theater candy, and Fiji water. Best believe I went in. Eventually, we all piled into the screening room downstairs, which is actually one of my fav spots as well. So classy.

The event was hosted by Cash Money label’s founders Baby & Slim. If you guys aren’t familiar, I got you. Bird and his brother Slim co-founded Cash Moey Records and recruited the “Best Rapper Alive,” Lil Wayne. From there comes Young Money, lead by Drizzy and Weezy. Aside from all the beef and bullshit since, there is no discrediting Birdman for being the brains behind the whole operation. The documentary showcases his rise from the trenches to becoming one of Hip Hop’s most successful. Talk about hard work pays off. On the surface, it’s already motivating. Once you peep this film, you’ll appreciate the story even more.

Again, super honored to be here. Larry Jackson, the head of Apple Music, was present to bring Birdman up after he makes his grand entrance. He had nothing but praise for Bird, applauding him for having one of the longest standing independent labels in the business. Which is also home to the world’s biggest artist right now. With 20+ years of hustle and grind and over a billion singles, there is not a moment that goes by where Birdman’s accomplishments go unnoticed. “The grind never stops.” Birdman was legit selling CD’s out of his trunk 20 years ago. I was only able to stay for the beginning portion, which follows Birdman into the streets of New Orleans where he grew up. His sister actually shows up on the big screen and speaks on her relationship with Bird, which reminded me of my brother. I love him to death. She was actually in the crowd tonight. So cute. Family is #1. 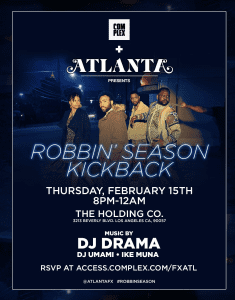 My next stop was Complex’ FX Atlanta party called Robbin’ Season Kickback! Huge thanks to Kate for the invite, this turned out to be the perfect intro to the All-Star festivities. They had me at the complimentary valet. If your event has this, you’re already winning. The Holding Co. is in the cuts of Koreatown, and the outdoor/indoor backyard setting set the mood. I think someone informed me it used to be an old mechanic shop, which is sick. There was alcohol, fancy hors-d’oeuvres, a DJ throwing down all the slaps, and SPACE HEATERS. LA was freezing tonight. Issa vibe.

And then literally back to the Palladium I go, which is literally next-door to Neuehouse. Wish I could have kept my parking spot, because that shit was no joke come 9:30pm. Huge thanks to Brittany for this! The long-awaited, highly-anticipated Nipsey Hussle show the same evening Victory Lap was dropping. Honestly, what a genius move on their part (Atlantic Records). Neighborhood Nip is an LA native from the streets of Crenshaw. If you love Hip Hop and you’re from here, you weren’t missing this show. Fuck NBA All-Star Weekend. Nipsey Hussle is a walking testament for anyone trying to make it. Evident in his name alone.

He used to be my favorite rapper, until he blocked me on all socials lmao. I was honestly trippin’ for a minute, but I’ve accepted it now. I posted a tweet from his Victory Lap listening, which I know I shouldn’t have done. It’s just so brazy to think I was only trying to support and hype people up for the new project, only to be repreminaded. I honestly can’t talk about it lmao. Even when Jeezy brought him out before Diddy, I was like ugh lmao. His music just slaps so hard. :'(

I literally was trying so hard to make it on time, but the universe said no. It was a zoo outside. We came in a little before 10pm and it literally took me 2 whole minutes to register Diddy was on stage. They performed “Young Nigga” and it was epic. 2 legends on stage. They let the crowd know they were in the studio for 2 weeks together. Also, this was another show packed to the brim. Definitely up to par with Dua Lipa’s show on Monday, only Nip had the city out. He performed “Blue Laces 2,” the follow-up to “Blue Laces” off The Marathon. This was Nipsey’s 5th album released in 2010. And one time for this 1500 Or Nothin’ band on stage behind him. They set the entire tone of the show with their live instruments. And one more time for DJ Vip, always holding Nip down.

“Grinding All My Life” is a slap. Seeing it live tonight was not only live, but inspirational. Nipsey is pure motivation to go get that bag. No matter your situation, you can do better. Shout out to Mark who joined me tonight. We actually met off a Nipsey show. Everything comes full circle man. Be good to good people, and karma will do the rest.

Was so not ready for Mozzy to pop up, but was SO here for it. I was hyped. Nipsey called him one of Cali’s finest. Real always recognize real. Next, he brought out Bino Rideaux, whom he has a whole mixtape with called No Pressure. Dave East actually brought him out at his show at El Rey, so the cosign is real. I need to know more about him. Bino, I’m comin’ for ya. And his pink hair was poppin’ tonight. They performed “SKURR,” which had Nipsey sharing a very personal message about how he’s lost lives throughout the process. The song was met with lighters in the air.

“4 In The Mornin” took me right back to one of my favorite mixtapes of all time: Crenshaw. This is a fan favorite. The next joint had Nip asking the crowd who grinds 7 days, leading into “Take No Days Off.”  He brought out Dubb for this one. My anthem. Crenshaw is timeless.

In this moment, Nip asking everyone to pull out their phones to check the time. He said Victory Lap was officially out in New York which meant the album is in all of our phones. Excellent promo lmao. He reminded everyone to bump this shit on loud the second they were out of the show. I actually heard “Right Hand 2 God” at the listening and saw how much it meant to Nip. This one’s the bonus track and really has you appreciating life for what it is, the good and the bad. He performed “Loaded Bases” featuring CeeLo Green and next.

And then another guest that Dave East also brought out at his show. Shit, Marsha Ambrosius is damn near the reason he cried on stage lmao. The West Coast’s hottest rapper and the East Coast’s hottest rapper both brought out the same special guests. This can’t be a coincidence. Regardless, “Real Big” was fucking beautiful. The song was matched with old-school footage of Nip from way back in the day. He’s seriously come such a long way. You can’t knock his hussle. Even me, blocked. I support the shit out of him. The way I see it, if social media didn’t exist, this wouldn’t have happened. Positive thinking lmao.

“LAST TIME THAT I CHECC’D!” Of course, he had to bring out YG.

But not before he gave his daughter her 15 minutes of fame. She literally sang every word of the chorus. So cute. Emani stole the show.

I can’t ever the fact that Nipsey Hussle announced an All Money In takeover to take place on the streets of Hollywood right outside the venue. And how much the police said NOPE. They were literally posted outside and had all the streets blocked off. It was honestly crazy the precautions they took, but that also goes to show how lit Nipsey is. Salute to the king.