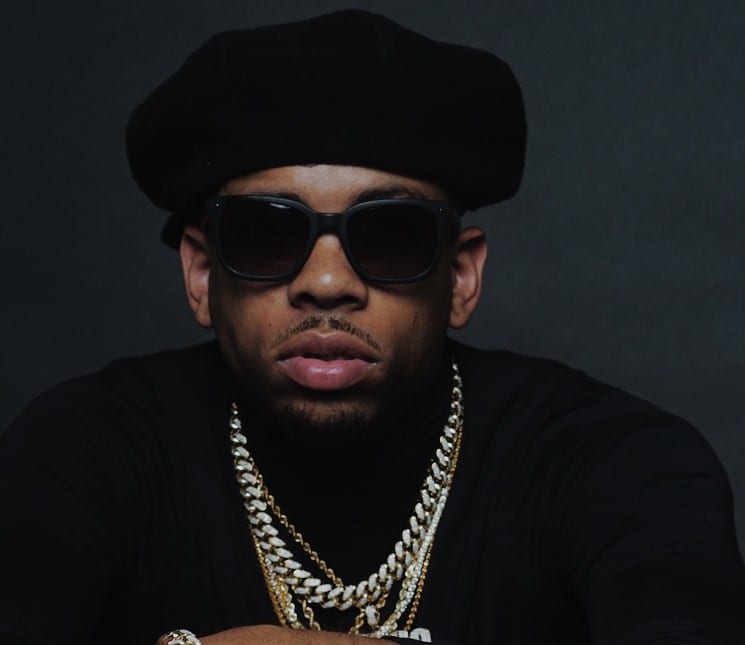 RJ “Mr. L.A.” genuinely is everything he claims to represent with his name. Firmly committed, for a start: You can find the bold letters “Mr. L.A.” etched into his hair (which he admits he needs to maintain twice a week). Growing up on the streets surrounded by gang culture, music was RJ’s only way out. But unlike other street rappers, real name Rodney J. Brown Jr. isn’t worried about fame. All he cares about is making good music that people can turn up for and enjoy, while making sure his own people can eat.

With a little help from Mustard and his 4Hunnid family, the OMMIO rapper is breaking through the barriers of underground and mainstream.  At the end of last year, RJ released his collaborative project The Ghetto with Mustard, which features guest appearances from Rae Sremmurd to Ty Dolla $ign to 03 Greedo.

Now, RJ prepares to unleash his upcoming mixtape with Joe Moses along with the birthday bash of the year: a New Jack City–themed prom.

L.A. WEEKLY: Beyond the music, what does being from L.A. mean to you?

RJ: Growing up in L.A. was like every typical other n***a. Every typical black man: just grinding, trying to make it, trying to do our thing. Now to finally make it, I feel like I sometimes owe shit back. Well, I ain’t made it yet, but I feel like I’m on a different type of come up right now. Being from L.A., I want to be a positive light for the city. Somebody that’s not successful but you know is going to be successful. You know those high school kids, the person that was most likely to be successful? It’s like that. I want to give back to L.A. L.A. means a lot to me. I’ve been out of L.A. and moved to different states but ain’t nothing like home. It’s ugly and it’s good. L.A. means everything. It’s tricky but it’s L.A.

When everybody around you is fucking smiling, looking good and feeling comfortable.

Nah, but when everybody is satisfied with their situation. People around me still have to struggle, still have to figure out their next move sometimes. It’s a good space, though. I’m not ungrateful but I’m not satisfied. And once that happens, there’s going to be a new goal. Once everybody around me is on and feeling themselves to the max — to the point where they’re feeling like a rapper — that’s making it to me. I want people around me to feel like rappers. Once I do that, then we want to take it to a new plateau. We want to take it so that people in the community are feeling better now. Because it’s different, I hold this rank. I owe so much to my community.

Do you remember the moment you picked up “Mr. L.A.”?

I picked that up around 2013. I felt like I could be something much bigger to the city, bigger than how we’re looked at. We’re looked at different than who we are, due to the TV and the exploitation early on. Now, we’re looked at all types of ways because of the music we listen to and the music that we’re kind of forced to listen to. At one point, radio wasn’t even playing our shit right. We had to listen to a certain type of music that had to be underground. All of that is what make us up, we don’t have a particular DNA anymore. That’s really L.A. now and people don’t get that, so it’s hard to sell it. It’s hard for the new school to come up, and for the old school to eat. They haven’t bridged that gap yet, and I feel like that’s what I represent. The gap of a new breed as well as an O.G. breed.

I remember I met you with Mustard at the Roc Nation party years back. Talk about your relationship with him and how he’s impacted your career.

Tremendously, to be real. I fuck with that n***a and what he’s contributed to my career. Right now, it’s like everybody is making it on their own. Everybody is doing their thing. What he did was allow me room to maneuver on my own. When I went to Mustard, he already had the platform due to YG. He put me on a platform to make my dopeness be looked at. If he didn’t put me on that platform, people wouldn’t have seen all the hard work I put in. All the sleepless nights, trying to make money just to pay studio time, trying to make money to put my family in a better position, walking to the studios, writing endlessly … it wouldn’t have mattered if I didn’t have that connection. It wouldn’t have meant shit. Hard work met preparation, and preparation met opportunity.

The last project you dropped was The Ghetto. What is it you want fans to get from your story?

I just want them to just say my shit’s tight. Bang that motherfucker. I feel like once you listen to it and you feel the vibes and the waves, it puts you in a moment. It puts you in a space where nothing else really matters right now. Whatever I’m focused on in life, I can manifest that. When you listen, it sprinkles in good thoughts and good game for you to really live and push forward. It motivates you to be successful as well as have a good time. That is a skill. That’s what I really want to relay. This is a real skill. It’s hard work, it didn’t just come overnight. Anything worth having is worth fighting for. And no matter where I’m living at, I’m from the ghetto. I can never go anywhere else without knowing where I’m from.

One of my favorite songs is “All 4’s” with Greedo. Have you talked to him since he’s been locked up?

Yeah, I reached out to him hella times. I haven’t talked to him yet. I’ma find out some information and write him a letter.

Can you talk about how you and Greedo squashed whatever y’all had?

We met backstage at my fucking concert. I hadn’t performed at the Novo and I sold that motherfucker out. We spoke and he was just like, “We gonna work and it’s gonna be fun.” Having fun with an artist and all that, I hadn’t had that in a long time. I’ve pretty much being doing my own shit. I really ain’t have no real camaraderie with him, so when bro slid through and was turning up and shit, that shit was cool. It wasn’t like we were buddy-buddy. We didn’t grow up together, but it was a cool collaboration. That’s what it’s all about: the music. If people ain’t fucking with the music, you got to figure out why.

If people fucking with the music, then you’ll understand you’re on the right path. You’re doing the right shit. When people focus on the music, nothing else matters. When we fucked around and started beefing, that was trash. It was funny and entertaining, but it was trash because that shit doesn’t really do anything for anyone. Somebody’s feelings are gonna get hurt, and then it goes elsewhere. I could say something about you and then your friend chimes in, and their feelings will get hurt. Motherfuckers just wanna have a good time.

You just dropped the “One Time” visual with Joe Moses. That’s a good time right there!

We was over there throwing money and shit, had the li’l strippers. I don’t know if they was strippers, they were probably just video girls. One of them had her clothes and I threw her in the pool with her clothes on. It was just having a good time. We were all sliding and moving around, it was just cool. We wanted it to be dope and just glorify a good time.

What can fans expect from the upcoming tape with Joe Moses?

Whose idea was it to make a whole project together?

Joe originally came at me like, “We need to do a project.” But at the same time, I was already interested in doing projects with artists. When I had the Rich Off Mackin [mixtape] with Choice, it was such a success. That’s my boy, so it was easy. We did that shit fast as fuck. It was just the business side that took so long. Fans are like, “Where the fuck the tape at?” But it builds up a want and a demand.

Talk about your mansion birthday party coming up on Sept. 21. What can we expect?

Wooooooo, let’s go! You can expect everyone to just have a good time. I want to take it back. It’s a cannabis, New Jack City–themed prom. I thought of a prom because my baby mama had never been to prom.

I’m thinking about bringing out the mic. [laughs] YG is performing. OT is performing. Eric Bellinger, that’s my boy. AD pulling up. I’ma be in the house with Rae Sremmurd, Swae Lee and Slim Jxmmi, even though they’re on tour right now.

I like five. That’s a good number. I’ma have TacoMel. I got D’usse involved. It’s just gonna be a good-ass time. My girl doesn’t even know, I’ma ask her to prom and all that. My boy Sincere is going to host that motherfucker, and you know he’s crazy.

You wearing a suit?

I’ma be on my New Jack City thing: throwback, laid-back and real lit. We gonna make it look like the real movie. 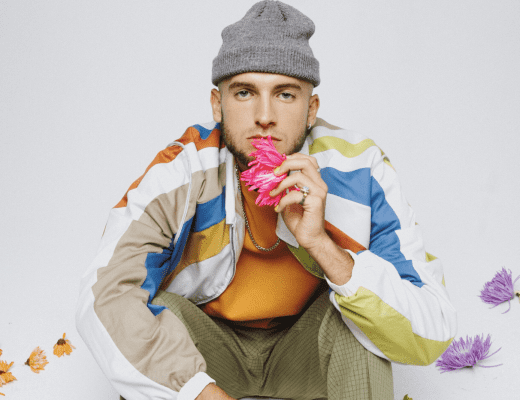 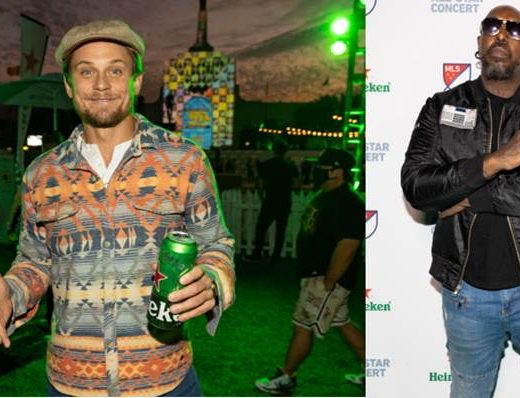 Rotimi Introduces New Album ‘All Or Nothing’ Virtual Listening Session