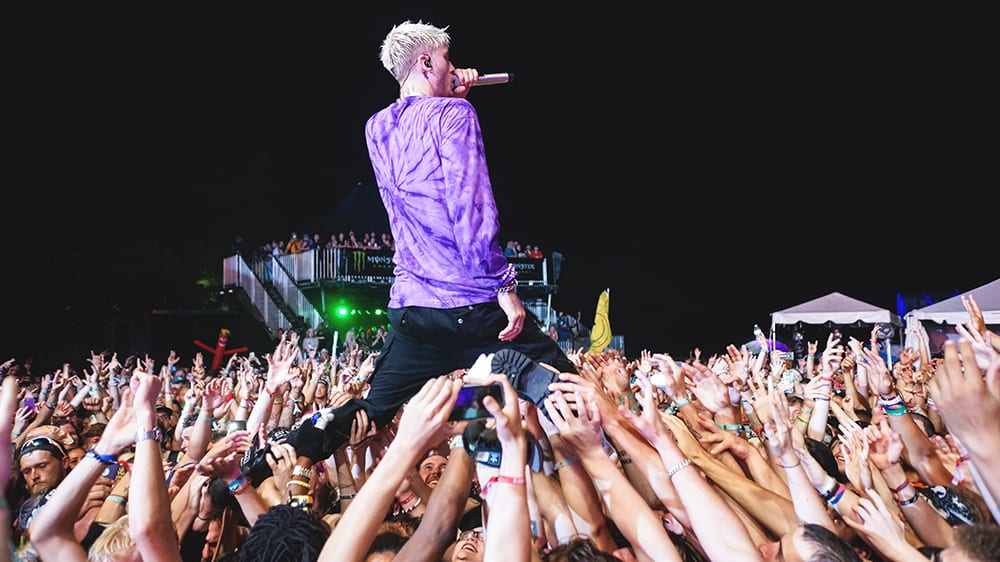 Machine Gun Kelly’s EST Fest is truly unlike any other music gathering. Take, for instance, the crowd’s signature chant: “EST, what the f–?! EST, what the f–?!” Then, there’s EST’s location: Butler, Ohio, an hour-plus from nearest cities Cleveland and Columbus. (It should be noted that Butler is more than 120 miles from Dayton, the site of a shooting rampage that took place not long after EST let out on Aug. 3.) And, of course, there’s the EST founder, MGK himself (real name: Colson Baker), who has curated this two-day VIP-free gathering of like-minded music lovers for six years running.

Think: Woodstock (we know, a sensitive subject), but scaled down to an intimate sold-out size of 7,000, and without the miles-long treks fans find at fests like Coachella and Lollapalooza. This year’s bill included both rock and rap elites like 21 Savage, Da Baby, Tyla Yaweh, Shoreline Mafia, YUNGBLUD and more.

Being the face of EST, an acronym for “everybody stands together,” MGK’s set delivered positivity and good vibes, which he says is proof of the media’s disconnect from the truth. “Change the narrative,” he implores Varietyduring an interview before his day two performance. “I encourage everyone to change the f–ing narrative. I’m so fed up with the journalism community. I’m furious because, little do you know, I’m one of you. What an ugly thing to do to run one of your own — to drive someone so honest and so genuine. Because when I’m gone, the story’s going to be different.”

He’s talking specifically about what he views as persistent attempts to reignite a feud with Eminem, originally sparked in 2012 when MGK described Em’s daughter as “hot,” then on Eminem’s 2018 track “Not Alike” and again a month later on MGK’s “Rap Devil,” which was accompanied by a tweet stating, “I had to take time from the grind to defend myself from someone I called an idol.” More recently, a MGK interview with Complex’ Everyday Struggle brought the beef to the forefront again.

Says MGK: “Typical, such bad journalism. What a way to look over 44 minutes of deep conversation. I challenge them by saying, ‘No, you are the ones igniting that beef again.’ I’m saying facts and speaking on something I can’t avoid. I’ve watched them do it to too many artists who are no longer here anymore and it’s all regret after that. Stop doing it. I put nothing but good energy into the air.”

During his set, MGK took a moment to pay tribute to some of those friends who passed, including Mac Miller and Nipsey Hussle.

The vision for EST was to provide “an escape,” MGK explains. “The people who come here have something to get off their chest. That’s why there’s so much love. It’s its own security. These are people who need those good times.”

This year’s theme aligned with MGK’s fourth album “Hotel Diablo” and throughout the grounds, fans were able to take in pop-ups of Hotel Diablo and the rapper’s forthcoming Cleveland coffeeshop, 27 Club, endless merch, and even staff members donning “Hotel Security” T-shirts in the same purple font as the album cover. Describing the message of “Hotel Diablo,” MGK says, “[It’s] a confession of someone’s truth. There’s a start and an end. The start is entering the honesty, the end is admitting to myself that ‘I Think I’m Okay.’”

Every year since the inaugural EST at Nelsons Ledges in Garrettsville, Ohio, the festival has grown larger and its lineup broader. Indeed, MGK takes pride in bringing togethergenres of rock, hip-hop, R&B and pop, as he does in his music. His two-hour headlining set on day two included special guests Naomi Wild, Blackbear and his 10-year-old daughter Casie, who helped him break the pinata as an introduction to “Candy” featuring Trippie Redd, a crowd favorite.

Also taking the stage was media personality Karen Civil, who flew in to host the grand finale. “This is my third time hosting, every year gets bigger and bigger,” she says. “The way he created his own community in Ohio, this is something that’s so unexpected. A lot of it is repeat fans and event-goers. This year I’ve noticed it was so many new people. It’s incredible what he’s able to do.”

MGK started EST Fest because other festivals wouldn’t book the artists he was not just a fan of, but friends with. “They said we were a liability and we couldn’t get insurance,” he recalls. “We were, like, ‘Alright, we’re going to throw our own.”

Loyalty means a lot to MGK, and it’s a two-way street. “Besides the fact that any one of those names I’d take a bullet for, they elevate as I elevate,” he says. “Most friendships wear out because that’s not the case. I’m someone who always wants to keep growing. I was fortunate enough to have a group of people around me who, if I’m not leading the race, they’ll step up and start leading it — and inspire me to catch up. I think it’s just that. We went from trading in a bunch of quarters for a $250 keyboard, making our first beats on that to now producing ‘I Think I’m OKAY.’”

SlimXX, who went to a rival high school, has been friends with MGK for over a decade. Today, he does all things for the rapper, acting as a producer, engineer and musical director. He describes the ‘XX’ at the end of each crew member’s name, among them DubXX, as a “family crest.“

“To me, it’s the weekend of the year where we can be free,“ says Slim. “If you look around, we can walk around all day and no one will ask for a picture because it’s a family thing. Everyone who comes here respects it.”

Adds MGK: “Just the fact they respect me enough to not ask for any pictures or autographs. It’s a tradition — I just go out and walk around amongst everybody. One thing I always tell people to come and check out is all the campsites because they all have different names, like Camp Rolling Stone. I recently posted this foot picture, there’s now a camp ‘These Toes Ain’t Loyal.’ It’s hilarious. They’re all great.”

i posted a picture saying “i miss my ex’s pretty toes” and this was the first comment. 🤣💀 pic.twitter.com/GWnBPLD1Lw

Andre Cisco, another longtime friend, an EST co-founder and MGK’s tour manager, concurs. “For me and my friends I work with, it’s a chance to project our vibe — how eclectic, open and different we are, that we accept each other,” he says. “The diversity in our crew alone shows that EST is our chance to share that love with everybody else.”

The love was felt. Mod Sun even married a couple onstage during his set, with MGK acting as witness. “Funny enough, I’ve actually married somebody at EST Fest, I think second or third year,” says MGK. “The wild wild Midwest is the way I describe it. There’s not really any rules here. It’s all love here, there’s no issues, human to human.”

MGK says he doesn’t sleep for a solid 48 hours while EST is happening. “Ask anybody on this campground, I’m always select lurking,” he reveals. “I walked around in a light blue hoodie with my hood up all of last night.”

Another graveyard shift activity was a 3 a.m. screening of “The Dirt,” the Motley Crue biopic in which MGK starred as Tommy Lee. Cardi B and Offset likes the Netflix movie so much, they shouted him out on Instagram. “I threw everything that was in my hands up in the air and ran around six times freaking out,” says MGK. “That was so cool. Cardi [and I have] met each other, but me and Offset know each other personally for many years. To have any of your friends or peers to be a fan of something you did enough to where they speak out on it, means a lot.” 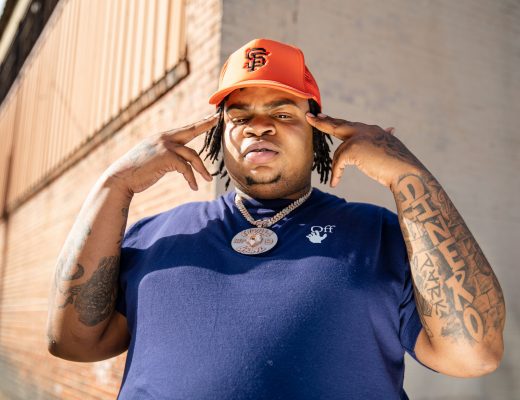 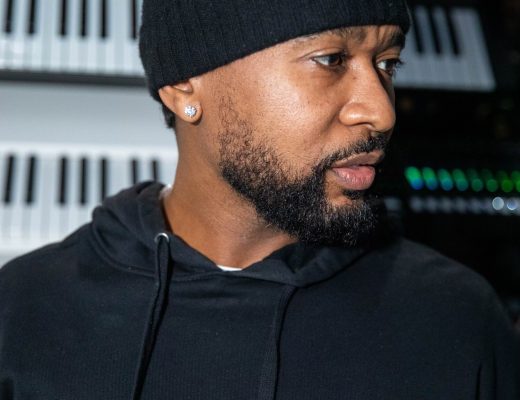 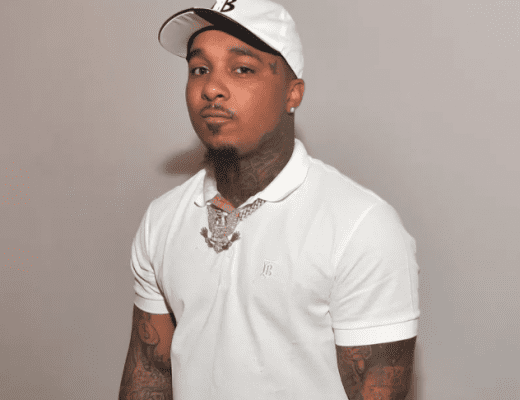