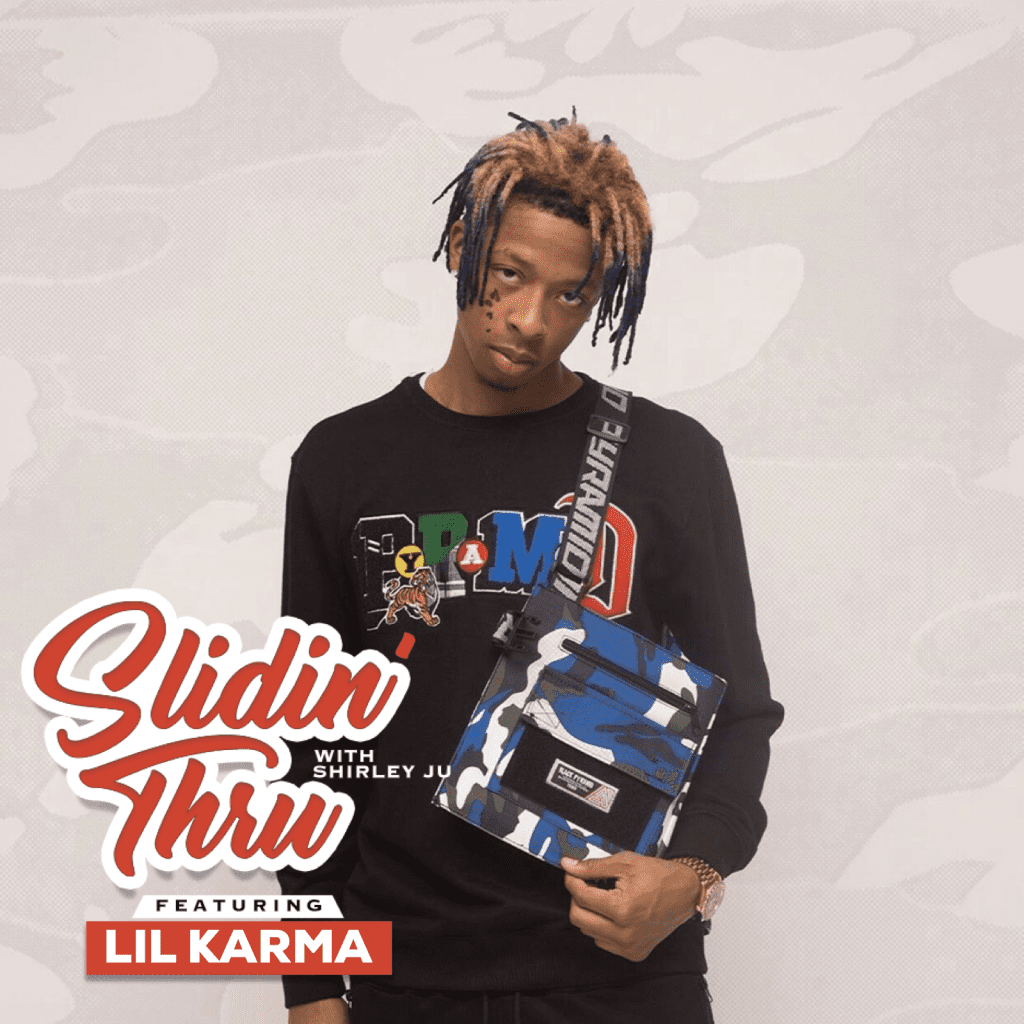 Lil Karma is here to shake up the rap game… on his own terms. Having only started making music 3 years ago, he’s already formulated his own sound and style that fans can’t help but gravitate toward. Beyond that, it’s the realness and honesty in his lyrics that audiences can relate to, allowing them to relate and cope just like therapy. Read more..

The 20-year-old’s most recent single “Lonely” is dedicated to his friend Jaleel who passed away back home in Jersey. Now, fans wait patiently for his 40 unreleased songs in the vault, with singles and videos all in motion. Karma’s favorite rappers range from Biggie to Lil Uzi, which give you a clear idea of what to expect.

How do they relate to you?
With certain things I’ve been through growing up, and I talk about what other people went through. So many things like the struggles, growing up in the hood, etc.

Being from New Jersey, what were you seeing growing up?
I saw a lot. The regular stuff like drugs, money, gangs, violence, all of that.

Did you have hoop dreams?
I had hoop dreams, but I took a different route. God had a different plan for me. I ain’t mad at what I’m doing now you know?

How important is it to come to LA as an up and coming artist?
It’s the biggest step, this is lit out here. LA is different especially for the hip-hop culture. I’m tapped in, I’m watching everything. I see everything. Social media is the key and I’m here now. This is just the beginning, it’s very exciting.

Favorite part about the West Coast?
The trees really. The trees are nice. When you go to Jersey, you don’t see nice ass trees like this. It might be the weirdest thing anybody could ever say, but the trees are nice out here.

At what point did you realize this music thing was forreal?
My senior year of high school I made my first song and people were vibing with it. Then I ran with it. I always did music since a young age, so I was always musically inclined.

What song was it?
It was “In My Bag.” Now, I grew that sound on to the next level. But it was hard back then when I first did it.

What was the inspiration behind your name?
I used to freestyle. I was really good at it so people asked me “what’s your rap name?” And I didnt have a rap name. I remember I was going through something one day, I was really mad and going through the everyday struggles. I’m like “I’ma just name myself Karma for everyone who did me wrong.” I just stuck with that name. That’s who I am, Karma.

“Lonely” is dedicated to Jaleel who passed away in a homicide. What were you going through when you recorded it?
I wrote that song. That’s the only song I wrote. I kept listening to this beat, I was feeling some type of way and needed to get into the studio. Then I kept seeing the Rest In Peace pictures on Instagram, like damn. I wrote that song because I felt lonely. “You don’t know nothing about feeling lonely…” I wrote it, laid it down and it came out. Crazy.

Talk about the independent grind.
It’s not even independent. My management, they help me out with a whole lot to make sure everything goes great for me. I don’t really have to worry about much because my team is the strongest thing I got right now, that’s behind me. They love me, they support me. Without them, I wouldn’t be able to do — not saying I wouldn’t be able to do it, but it works out that way better. Just getting up in the morning to do music. It’s like saying oh you’re an artist, you feel entitled to a lot of things, but the engineer is mixing the song. Just like the producer makes the beat.

What is it you want fans to get from your story?
My fans relate to me so much, like they feel me. I want my fans to just wake up and feel like they’re not alone. When they’re listening to my music, they can really tap in and feel like okay, he is speaking for me what I couldn’t do. I want them to know they’re not alone, you go through some things. Sometimes it’s easier to just put certain things aside and keep trying to overcome and elevate yourself, instead of staying in all the negative stuff and dwelling in that negativity.

You’re only 20. What are some goals yourself as an artist at this point of your career?
To make the XXL Freshman list, and chart on Billboard.

What’s it gonna take to get there?
God really. Hard work, everything I’m doing right now. All this work that’s being put in, the consistent grind and not giving up. Even though it might get tough, you might feel like it’s not going right or as fast as you need or want it to go, but sometimes it moves just the way it needs to.

How important is social media for your career?
Social media is everything for my career. That’s where it’s lit at: Instagram. I already got a great fanbase right now and I’m gonna keep on being consistent. I’m gonna grow. I want to be a role model ‘cause even now kids hit me up every single day. I want to be a leader. I want to make people feel like it’s okay to be different. It’s okay to be weird. Social media is the #1 key for me right now, that’s my biggest focus.

What’s the best encounter you had with a fan?
Oh man, a whole bunch. My best encounter was when I went to Buffalo for a show, it was crazy. This kid came around the whole block to come to the back where I was at, just to see if his sister can get an autograph. I’m like damn. I like the reactions. I forgot about this, this how crazy it gets. This other kid drove 5 hours to see me. He drove 5 hours from Buffalo to see me, it was a different person. I was performing at Starlight Ballroom in New Jersey.

How does ur home fanbase compare to elsewhere?
I got them all on lock. My hometown — no cap, I feel like Jersey don’t even really support the way they should. Other states I’ve been to, other cities like Buffalo, Connecticut, motherfuckin’ Louisville, we went everywhere. They support me more than Jersey do, but I still got them on lock.

3 things you need in the studio?
Weed, rollups and water. Backwoods, I like Dark Stout.

What advice do you have for an aspiring Lil Karma?
Don’t quit. Stay focused, stay positive. Even if shit gets tough, know that I didn’t just grow up overnight. Shit is work and keep trying to get better. No quitting.

Anything else you want to let us know?
Follow me on Instagram @lilkarma98. I’m on all platforms, iTunes, Apple music, Spotify, Youtube. “Lonely” music video going crazy right now.

Is there a significance in ‘98?
That’s the year I was born. 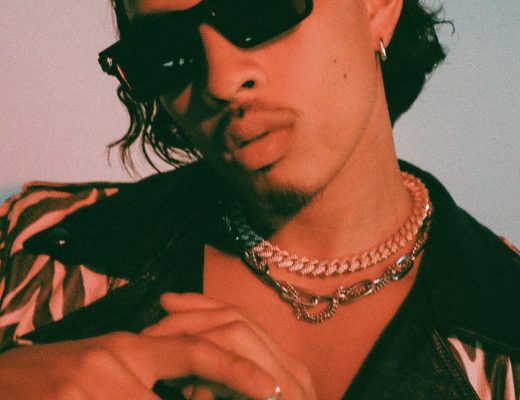 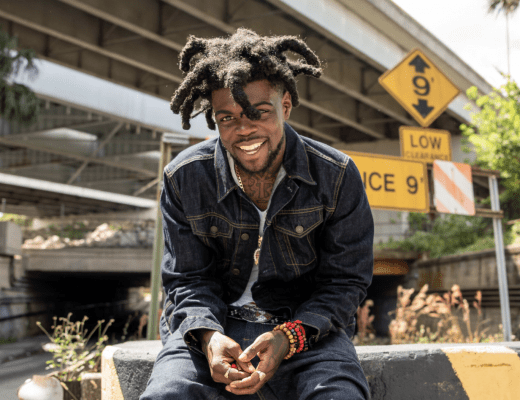 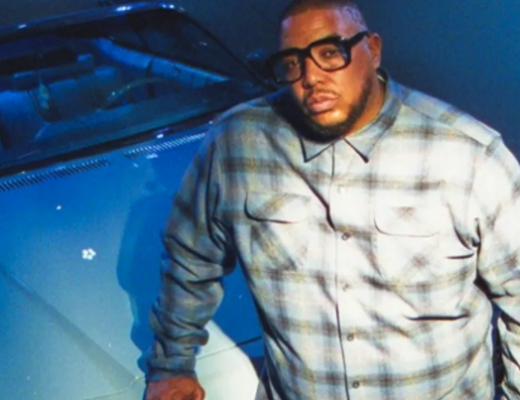