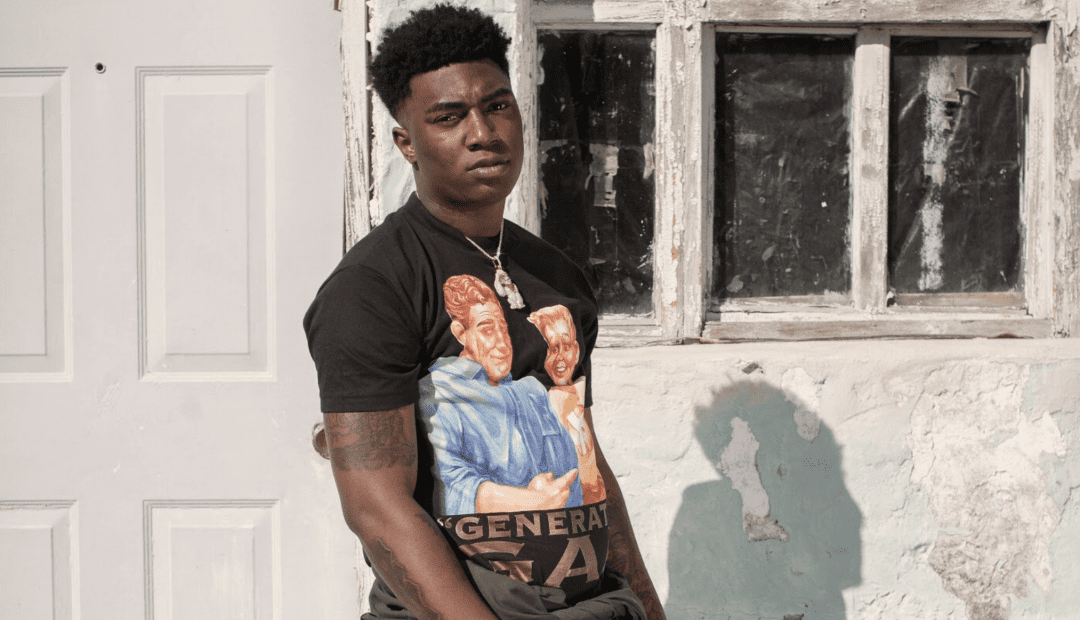 Fredo Bang is the next rap superstar to come out of the South. Following suit with rappers from his hometown such as Kevin Gates and NBA Youngboy, the Baton Rouge native describes himself as “a closed book” — opening up only through his music.

He explains, “You can’t let everybody in, that’s where it gets dangerous.” Real name Fredrick T. Givens II creates bangers and anthems for the streets, giving hope to those stuck in the hood that they can too, make it out and flourish. In 2017, Fredo lost his best friend Gee Money while behind bars, which gave him the fuel and motivation he needed to dedicate his entire life to the music.

After being multiple charges and completing a 2.5-year stint in jail, Fredo is back and better than ever. Currently signed to Def Jam, the 24-year-old went viral with his single “Oouuh,” which later received a standout remix from Kevin Gates. With over a million followers on Instagram, Fredo smiles through the pain — something he’s grown numb to over the years.

Most recently, Fredo landed a spot opening for Moneybagg Yo on the Time Served Tour (sadly on halt due to Coronavirus). Flaunt caught up with Fredo to discuss losing his best friend Gee Money while behind bars, his Top 5, love for Dragon Ball Z, and more!

Have you always been a closed book?

Yeah, pretty much all my life. I’m trying to break it up a little bit. Step by step, I’ll get there though.

What was it like growing up in Baton Rouge?

It’s a real challenging place. If you’re weak, you’re beat. So you have to stay at the top of the food chain.

How did you do that?

For one, listening more than talking. Paying attention to what’s going on, that goes along with it.

I wouldn’t say anybody influenced me. All I did as a kid was watch Dragon Ball Z and play video games.

Do you still watch anime?

Yeah, I have an addiction to Dragon Ball Z. I have the dolls, the movies, the books. I have a whole section in my house for it.

I grew up on it so it’s something natural. It’s a first love.

Yeah. I love Dragon Ball Z. I wrote to them before. I wrote them and told them I want to work with them. They didn’t write me back. [smiles]

On IG? They probably didn’t see it.

Yeah, probably not. I probably have to email them or something. [chuckles]

What do you want to do with them?

Anything, I don’t really care.

When I came home from jail, in May 2018. I had put up a video of me singing “Oouuh” acapella, and I got 200K followers in a week or two. It went real viral so it showed me [I could do this]. I was doing a video with Einer Bankz and his ukulele. It’s a song that I never made or finished. I posted it to Instagram, it went viral. I already had 200K followers already, but it doubled.

How did you get to 200K initially?

Just being me. Before I went to jail, I had 70K followers. Then when I came home, I had 120K. People still wanted to see me I guess.

A couple times, I posted from jail. I had a phone sometimes.

Locked up for 2.5 years for attempted murder, illegal use of a weapon. Came back, got the aggravated battery and stolen phone.

And you’re still on probation?

Are you good now? Are you behaved?

What was the biggest lesson you learned behind bars?

Not everything is what it seems, and to always watch your surroundings at all times. Because everybody has their own intentions. It’s up to you to find out what it is.

I’m shook you gained such a following from behind bars. What did you do?

Nothing. I mean, I didn’t have a phone the whole time. I could say G Money, my best friend who died, he kept my name alive. He’s steady putting out music videos. Shouting me out and saying “free Fredo.”

How did he pass?

You were in jail when he passed. How was that experience?

I had to sit down and reevaluate my life. Figure out what I was going to do. Because at that point, I wanted to give up on everything. I never imagined doing anything without him. That was my best friend. That was my right hand.

What was the first thing you did when you got out?

What video was that?

“Shootas on the Roof.” Two weeks later, I dropped a song called “Father.”

Talk about both singing and rapping in your music.

Well, I really just do whatever. Whatever I hear the song tell me to do.

Do you let the beat guide you?

Yeah, I don’t really go in there with any ideas or nothing. I like the beat and I’m feeling it, I just go. Normally, I start trying to make a cadence or a melody to it. Once it gets the vibe I want, I put words to the cadence or the melody.

You do everything off the dome?

Yeah. I don’t write at all. I can’t really explain it, I just put the headphones on and let the beat talk to me.

What did that mean for your city to get Gates on the remix of “Oouuh”?

It was personally big, and big for our culture. We’re from the same place, so it was big for the culture and for me. I always wanted a song from him. I’m hoping to work with him some more.

“Yo Slime” is at over 2.5 million views in less than a few weeks. How was that studio session?

We were vibing in there. Like I said, I let the beat guide me. Shout out to Hardbody B-Eazy, and DJ Chose. It was a one of one. Not going to lie, I didn’t really expect to do what it did. It was just some content. People gravitated toward it, so it’s a blessing.

Can you define Slime for us? I think of Thugger.

It used to be a Blood thing, now it’s an open thing. First person I heard say it was Lil Wayne. “What’s poppin’ Slime? Nothin’ five.” That’s the first time I heard it. But other than that, I don’t know. [chuckles] I think Young Thug done took it and made it to where it’s something cultural and more open. He definitely changed the vibe of it.

Talk about linking with Moneybagg Yo on “Story To Tell (Remix).” When did you guys first meet?

That’s my brother. That specific song, we didn’t know each other at the time. It was connected through Big Jook, Gotti’s brother at CMG. Me and him had a relationship. I said “man, what you think about Bagg getting on this?” He’s like “I’ma shoot it to him and see.” The next day, he said he was going to do it. Sent it in about a week, we shot the video.

Do they just randomly shoot it back to you?

Yeah. I was actually on the road asleep. I got a text message, it popped up. I’m like “let me check this out.“ Ever since then, we’ve been locked in. He’s real good people. He teaches me the ropes and gives me advice on a lot of things.

Can you talk about your journey to Def Jam?

I’ve gotten a lot of label offers. I just felt like it was time. I had built my foundation as much as I could by myself. It’s time to take it to another level that I couldn’t do by myself. I’m trying to get the billboards and Platinum plaques. Def Jam’s been good, I love it.

What are you most excited for going on tour with Bagg?

Has Roddy seen your remix for “The Box”?

I’m not sure. I’ve only had one conversation with him, that was back in 2018. I don’t really talk to him.

It was cool, we’re just learning about- he said he liked my “Oouuhh” video, I told him I liked his videos. We chilled in the club, shouted him out on the mic.

What can we expect from your forthcoming tape Most Hated?

What’s your relationship with YNW Melly?

That’s my partner. I talked to him a couple weeks ago. He’s good. We’re family. I pick his little brother up from school every now and then. He’s still down the street. I talk to his mama on a daily basis.

Is Melly holding up okay?

That song’s going to be crazy. Did y’all make that in the studio?

Definitely. No, I actually had the song with him already. Then when he records, he takes 3 takes. So I took an old take and I made the song around it. I let him check it out, he’s like “yeah, it’s perfect.”

What is your most meaningful tattoo?

Probably, this one [points to chest]. That’s Gee Money right there. I got Batman and Robin. The monkeys: hear no evil, see no evil. I got my cousin that died right here. I got big 8 on my shoulders, my other partner that died. TBG.

You say you want to be known for your music. What would you say is the song that defines you?

I feel like all my songs give you a piece of me, so I couldn’t really say which one. Probably “Dawg Gone,” that’s the most emotional song. “Father” is one too. Probably “Father.” On that one, I tell you about me being in jail, the people I lost, and coming home. Just trying to get myself together in my thoughts. Give them a piece of me.

Most Hated tape dropping later on this month, March 27th. 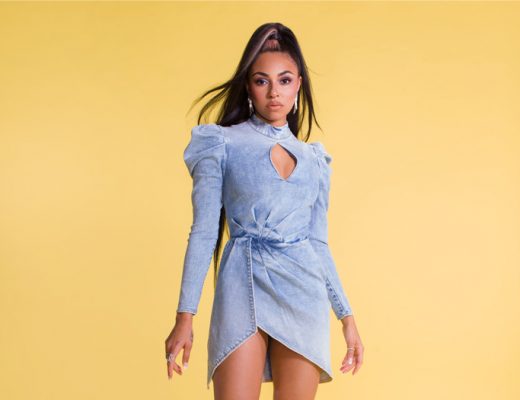 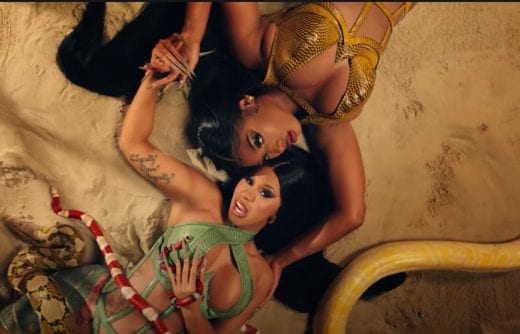 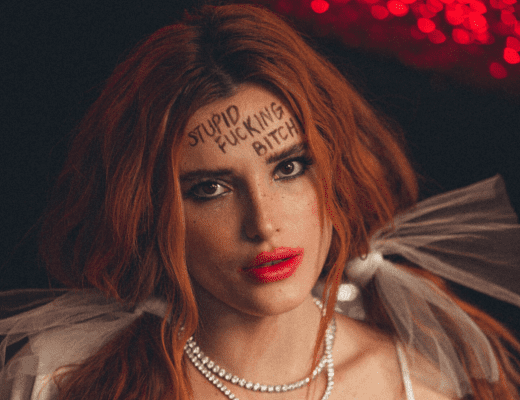