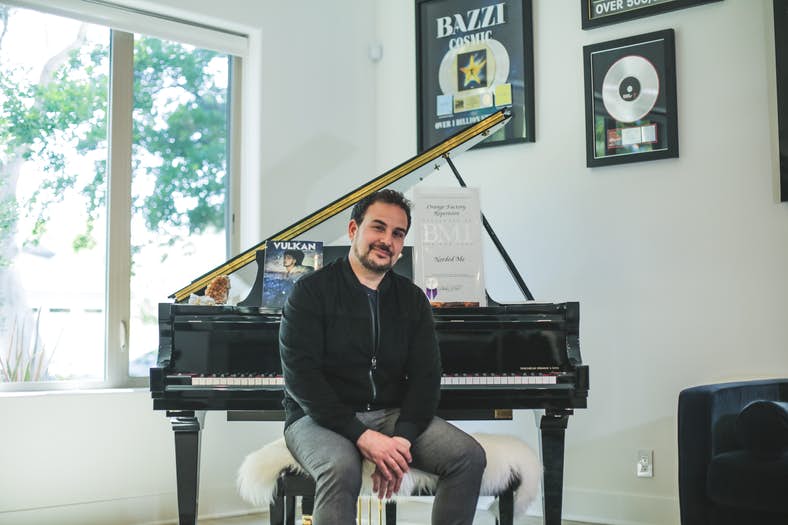 Jeremy Skaller is the co-founder (alongside Jared Cotter) of The Heavy Group, a management, media and production and Record company, focused on artist partnerships and creativity within the realms of music, film, tech and wellness. From getting his start as a Producer to now a manager and successful entrepreneur, the Philadelphia area/New York native sees no limits when it comes to the music industry — and he knows good talent.

Having worked with everyone from Rihanna to Ariana Grande to Khalid on the publishing side, Skaller is a former songwriter turned record producer, turned manager, turned record label executive and publisher. He states, “I wear a lot of hats, but it all starts from this place of being creative.” Being a piano player himself, he’s always approached his work as a musician and creative. 20+ years later, he’s now spending his time building other careers — which means less time in the studio.

The Heavy Group’s current roster includes Kiana Lede, Bazzi, Jay Sean, Rice N Peas and others. The Heavy Group also has a deal with Republic Records, with their signees Shaylen and Alec King and newcomer Angelic.

AllHipHop caught up with Jeremy, who had just returned from spending an entire day at his brother’s farm in Massachusetts.

Where are you from and how did you get your start in all this?

My family are all from New York. I grew up between the Philadelphia area and New York, spent a lot of time in Europe and Toronto, Canada. I traveled around a lot as a kid. I’ve been playing music since I was 4 years old. I was the little kid playing Bach at the age of 7. I was a chubby nerd on the piano. I formed a band in college, which got really popular in the 90’s. We toured all over the country doing 200 shows a year or so. That led me into songwriting, not just for the the band but also for other people and then producing for them. I went back to New York in the early 2000’s, had 10 Billboard #1 dance remixes (with my then partner Robert Larow). I then linked up with Desert Storm, Duro and DJ Clue, had a run working on a bunch of hip-hop and R&B records. I met this british kid in 2007 named Jay Sean, produced most of an album for him and then later on, all of his hits from “Down” to “Do You Remember.”

So you brought him into Cash Money?

I’m the guy who brought him to Slim and did that deal in 2008. I did 2 albums with Jay on Cash Money, produced almost every song that everyone’s ever heard from him during those years. From there, I went on to sign producers Khaled Rohaim and Digi (Jamil Chammas). Digi’s gone on to produce a bunch of Khalid’s hits, including “Love Lies” with Normani. Khaled has worked with Ariana, Rihanna, Dj Mustard and more. Khaled went on to produce “Needed Me” for Rihanna. I co-published that record.

Along with the production success, I started to branch out and sign writers and producers, develop them. All of them have had a lot of success. In the last 5 years, we signed this production group called Rice N’ Peas who have produced all of Bazzi’s hits, every single one. Most of Kiana Lede’s music as well. Kiana Lede and Bazzi are both part of The Heavy Group family. I’m a big believer in keeping it all in the crew and family. Kiana’s music goes through our production deal at Republic where we have a label deal as well.

It all comes from being in the band (Belizbeha), then to dance remixes, producing/Remixing, to Clue, to Cash Money, to now, my own thing.

When did you first get the idea to start The Heavy Group?

Around 2014 I was managing this boy band out of Australia, Janoskians. They were a Youtube sensation, no one had really done Youtube crossover yet. They had millions of subs. I realized I needed to form an ecosystem, a new management structure around them. One that could do merch, apparel, fragrance, touring, video games. I produced 2 movies for them with Lionsgate and Dreamworks. The Heavy Group was formed out of a necessity to do more than make records. It was time to build out into the world, do other creative ventures that weren’t about the song. I don’t consider myself a manager really, my partner Jared Cotter doesn’t consider himself a manager either. We’re creative partners for our people.

Do more in what capacity?

With Jay Sean, now we’re into the second season of his podcast “Basement Banter”. He also has a TV deal that got picked up, a comedy. Kiana Lede, we’re in development on her own TV show. In those types of ways, we move beyond what many think of as the traditional music management company.

What does the mantra “creators for creators” mean?

There was a very long time in history where an artist and manager’s typical relationship was, “suit manages creative.” That ran into lots of lawsuits, lots of unhappy artists, artists feeling like they’re misunderstood or their art was being misappropriated. Led down the wrong path… commerce before art. As a creative, as a piano player and producer, and as someone who thinks about the music before the commerce, this creates a much more natural, symbiotic relationship between myself and the artists I’m partners with on the artistic endeavors we undertake together.

I’m sitting there talking about happiness, joy, fulfillment. I’m using words a lot of other more traditional companies don’t use when it comes to the health and wellness of their partners. I’m really creative first, even if that means the money isn’t always as good. (We do just fine).  We crushed it with Bazzi, we crushed it with Kiana. Jay Sean has had a 17-year career and 30 million songs sold,. None of those decisions to crush it were because we are/were trying to crush it, we’re just making good creative and empathetic decisions.

You’re also a 2x Grammy nominated songwriter, what songs were those?

It’s funny, the rules for the Grammys have changed. Technically speaking, I’m not Grammy-nominated. I’ve worked on projects that were Grammy-nominated. If you’re not on the song itself, you’re not actually nominated. I published “Needed Me” for Rihanna, nominated for Song of the Year. I worked on a Spanish and English hybrid album for Frankie J in 2014, produced 2 songs. That was nominated. I’ve always tiptoed around or been very close, but never got that Grammy nomination. [laughs] But it’s okay.

Talk about the joint venture with Republic Records.

After all the Cash Money success, Slim and Baby leaned on me heavily for the pop side. Monte Lipman knew me really well as a result. In fact, “Down” was Republic’s first Billboard #1, they never had a #1 before. So my relationship with Monte goes back to 2009 with a lot of success. When Bazzi was blowing up, Republic passed on signing him. I went back to them a little later with the Label JV idea and said, “Let’s not do that again, you know I’m going to bring you only the best of the best, and I’m going to work really hard to make it work.” They said, “You’re right,” and the JV was born.

We have 3 artists signed right now: Jared found this dynamic teenager, Angelic, who’s a 16 year old Venezuelan girl out of Miami. She’s a 1st generation American and has all these South American influences from her Parents but she also grew up with R&B and Hip Hop here in the States.  Her music is late 90’s, early 2000’s throwback influenced.  R&B artists like Tyrese, Mariah, Aaliyah, Destiny’s Child…etc. We have Alec King, who’s a rapper out of Denver. We call him the Larry David of hip-hop. He’s a serious lyricist, but carries a sense of humor. He’s great. We have Shaylen, who’s a Dua Lipa, Lady Gaga type of artist/instrumentalist, with honest and vulnerable pop records.

She’s a Cash Money rescue. When I got Jay off the label, which obviously wasn’t the easiest thing in the world, I also got Shaylen off the label. She was stuck in a very bad production deal, in a pop group. I managed her for a long time, got her sea legs back underneath her because she’d been in a group for so long. She no longer knew what it meant to be a solo artist, her brain waves had to reconfigure. It was like burning new neural pathways and now she’s much happier.

I’ve been thinking about ways to diversify Jay’s career.. You can’t make the same records in your 40’s as you did in your 20’s. Because Jay’s South Asian, he’s got this incredible, global fanbase. He’s also the first Indian to have a Billboard #1. He’s the first Asian period with a Billboard #1 in America. He’s also only 1 of 3 British artists with a #1 here in consecutive weeks. His personal story is even  greater than the music though, so we’ve been segueing him into this podcast and TV show, both of which got picked up.

The podcast initiative was for him to start telling the crazy stories that no one would ever have the guts to talk about or believe actually happened. So many of us take ourselves so seriously, while Jay’s Just having a laugh. He’s got a very dry, British sense of humor.  He’s like “ah whatever man, I’m 40 I’ve had my days in the clubs, I’m going to put out records I love and talk about my past, have fun with it and see where that goes.”  The stories are classic, fish out of water anecdotes about a British-Asian-kid from London and the CashMoney Crew. It’s hilarious, the stories are so funny and almost unbelievable. He invites guests on to tell stories they might have been previously reticent to talk about. Natasha Bedingfield told some great stories, Melanie Fiona did as well. Sean Paul talked about how he used to get mistaken for Shaggy, that was hilarious and so honest. We have podcasts in development for a few of our partners now.

It’s always the journey, not the race. My stance is: build good shit and good shit will come. We’ve been doing that. The goal is to make sure all the artists we currently have, in 5 years, are absolutely good and don’t need us anymore. That is a job well done I think. . You’ve got to leave people better off than when you found them. I really believe in that.

Anything else that you want to let us know?

My partner at The Heavy Group Jared Cotter and I launched a new record label called Sit Till I Learn Love, which is a meditation music initiative. We’re signing meditation music artists and curating music playlists for meditation. We consider ourselves wellness activists, that’s our thing. And Jay Sean’s wife, Thara Natalie is a yogi, Reiki healer, spiritual leader. She’s a big part of what inspired us to do this.

For the past 3 years, I’ve hosted New Years’ Eve meditations at my house. We had 65 people this past New Years’ Eve. It’s where my headspace is right now. There’s a baseline anxiety people are going through globally. If we could put some music out into the world to help people feel more calm, a mini-holiday in their work day. A mini-break, a little vacation. 3 minutes of something to make them feel good. A good vibration, a good tone, a good rhythm, a nice piano sound. A guided meditation to snap them into focus and into a better day.  Just press play and give yourself 3 minutes of peace. 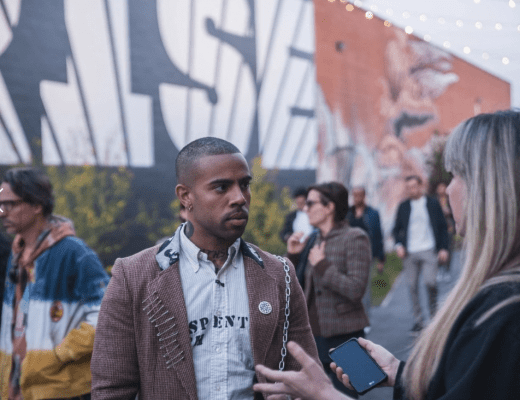 WE RISE BRINGS A POSITIVE MESSAGE TO DOWNTOWN LOS ANGELES 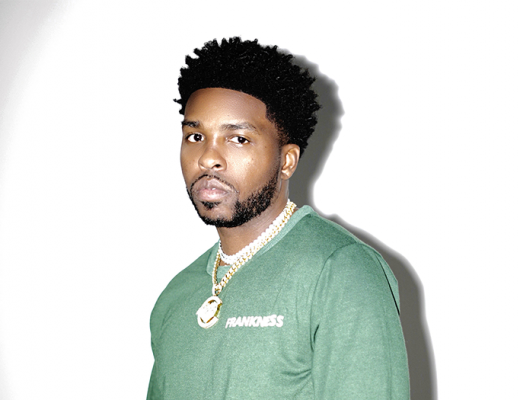 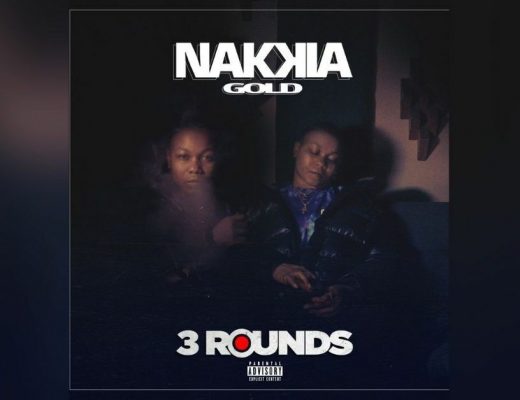