DeathbyRomy is in her own lane, creating her own version of “left of center, dark pop” and paying attention to every last detail. Born and raised in Mid-City, Los Angeles, the singer-songwriter eats, sleeps, and breathes music. Having written her first song at the young age of 5 and releasing her own music at 15, Romy has established an incredibly loyal fanbase and continues to grow with each release.

Pouring both pain and euphoria into her lyrics, her ballads reflect real-life experiences that we can all confide in and relate to. Boasting nearly 100k followers on Instagram alone, real name Romy Flores holds nothing back — exuding confidence, originality, authenticity, and her signature eye makeup we can’t get enough of.

Following the release of last year’s Love u — to Death EP, her Capitol Records debut, Romy returns with her newest single titled “Fiending For a Lover.” The quarantine-inspired record is paired with a cinematic visual as she plays dress up in her usual Harajuku punk fashion and corpse-painted makeup in front of a life-sized dollhouse. Check out an exclusive photo gallery from the video shoot below, all taken by Romy’s younger sister Ella Flores.

Flaunt caught up with Romy via Zoom, who was up until 1:30am the night prior in the studio.

What was it like growing up in Los Angeles?

Honestly, it was less of a curse and more of a blessing in terms of being born in the most perfect place in the world to try and want to start a music career. Definitely a bit of a hassle in my own household at different points with parents’ financial stability and household dynamic. We fostered a kid at some points, but all and all everything brought me to where I am now. I’m mostly grateful.

Talk about being biracial and bilingual, and being surrounded by cultures.

I’m half-Mexican on my dad’s side. My dad’s whole family is from Mexico and different parts of Mexicali. I’m super proud of that side of my culture. I love that Mexican culture embraces life and death as an equal cycle. I’m a huge fan of things that are a bit odd, so I love that my culture embraces that too. I feel blessed to have been raised in LA, surrounded by kids of all different ethnicities. I’m really happy I got to go to public schools and be raised in the public school system, because there was no limit to the cultures I got to experience and be introduced to at a young age.

At what point did you realize music could be a career for you?

About 15, I realized that high school was not for me. All I wanted to do was music. I dropped out of normal schooling, got my GED. Though I wasn’t sure how I was going to make it work at the time, I was going to dedicate everything I could to going after my career. I worked normal jobs. When I found my first manager was when I solidified that people saw me for the star I believed I was, that I could really do this shit.

Honestly, I had no idea that song was going to find so much success. Every artist says this, but it was a really crazy pleasant surprise. You always think you know what the one is, and it wasn’t that one. I’m really happy that people liked it though.

How does Dia de los Muertos influence your art and visuals?

I’m very inspired by a bit of macabre, dark art, religious art. How different Hispanic culture embraces, honors, and immortalizes the dead is really dark and beautiful at the same time. It’s a bit strange, but very beautiful. It’s not necessarily a big scary thing, I believe this life is our death so we should live every day like our last. Live with a lust for life because you’re only here once. I mean, depends on what you believe in. [laughs] But I’d like to make the most of my time here. I’m very influenced by art that surrounds those subjects and themes. I’ve always been inspired and drawn to cultural, religious, dark art. I love the beauty and the darkness, how they flow together.

Talk about recording “Fiending For A Lover” in quarantine, because it’s so relatable.

That’s one of the first songs I did while in quarantine actually, I’m glad it came out so good. I was working with my friends Rob Cavallo and Ava King, we were talking about how we were feeling. I told him, “I keep fantasizing about my imaginary boyfriend that doesn’t exist, who I wish was here to keep me company in these weird times.” I’m a hopeless romantic in general. That song came to be a very fun, hopeless romantic bop. It originally didn’t have that rock heavy bridge. We set it up a month after we recorded the other parts, which were more a soft take on fiending for a lover. We hadn’t seen each other, all going crazy in quarantine. That manic, stir crazy energy gave more life to that part of the song, it’s a fun one. 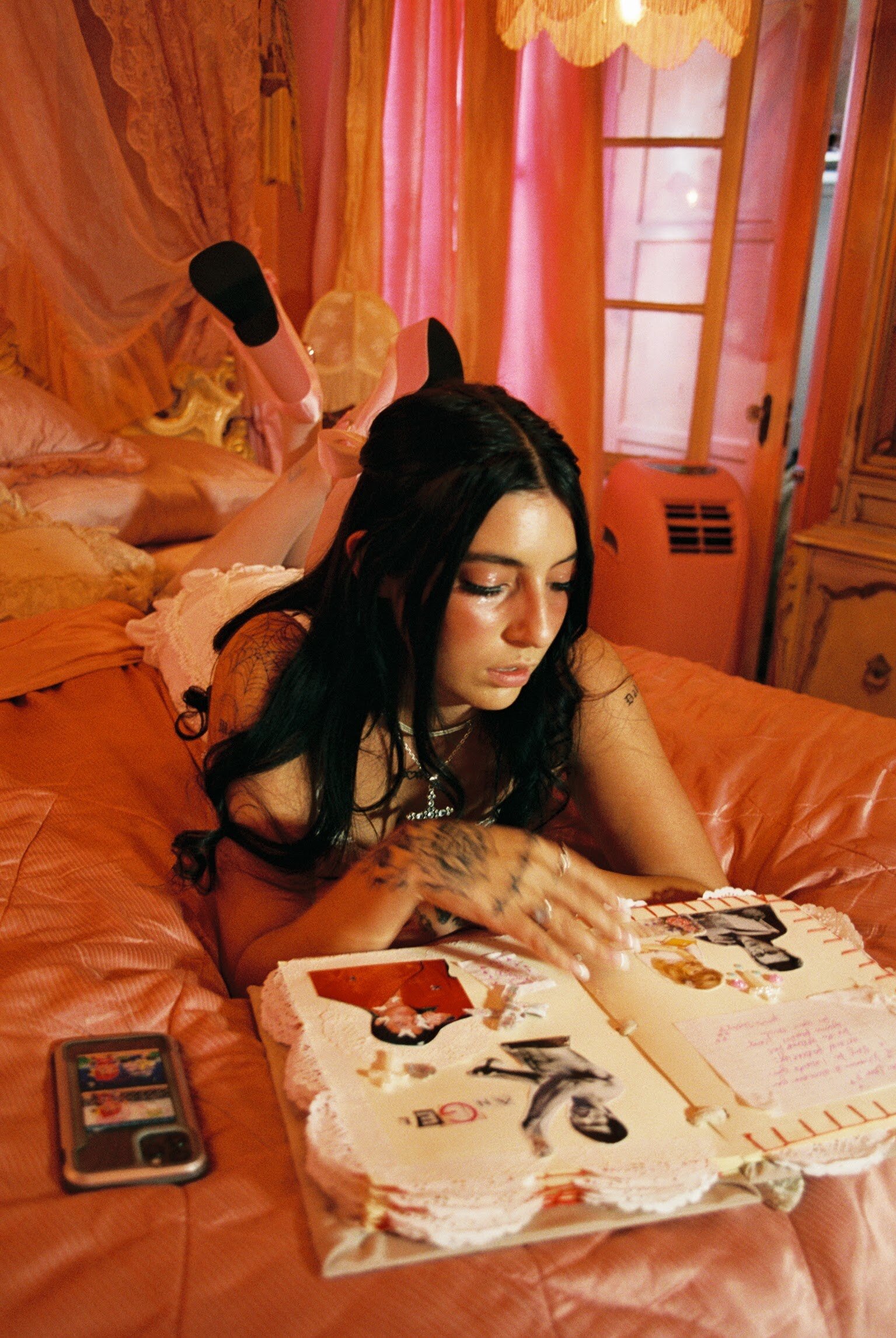 How were your DMs looking after you released that?

A lot of my fans want to marry me, which is really sweet but I don’t know how I feel about marrying or entertaining a relationship with someone I’ve never met. To be honest we’re still searching, but we’re solid for now. It’ll eventually happen, right? [laughs]

Best memory from the video shoot for that one?

Getting to play dress up nonstop all day was fun and hectic at the same time. Playing dress up is and has been one of my favorite things since I was a child, it makes me feel very in touch with my inner child. Getting to dress in giant life size dollhouses was a dream come true.

How was it having your little sister shoot photos on set?

My little sister Ella is one of the most talented people I know. She developed her talent so innately. I love her shooting me. She knows my angles, she knows what I’m self-conscious about. I don’t think there could be a better fit for someone to shoot me, especially behind-the-scenes when I’m vulnerable moving around and not posing half the time. It’s perfect.

Manic, Harajuku street goth, that’s probably the best way to put it. My closet is filled with everything from Supreme to these weird sweaters to Lolita dresses from Japan. Half of it is black. [laughs]

Being only 20, what are some goals for yourself?

To be able to tour the world successfully many, many times. To be able to come and touch all of the fans who resonate with my music, support me and my vision. I hope to maybe sell out stadium arenas one day. I hope to go out a legend.

I miss performing sooo much. [sheds tear motion] Last summer, I got to do a few festivals for the first time ever. Festivals are some of the greatest places I’ve ever been able to perform because the energy of people who haven’t heard your music is as equally supportive as a room full of people who all know who you are. I received a lot of love and support which I’m really blessed to experience.

I love you guys at Flaunt, I love what you do. I hope everyone’s taking care in this crazy time, doing their best to stay sane and creative. 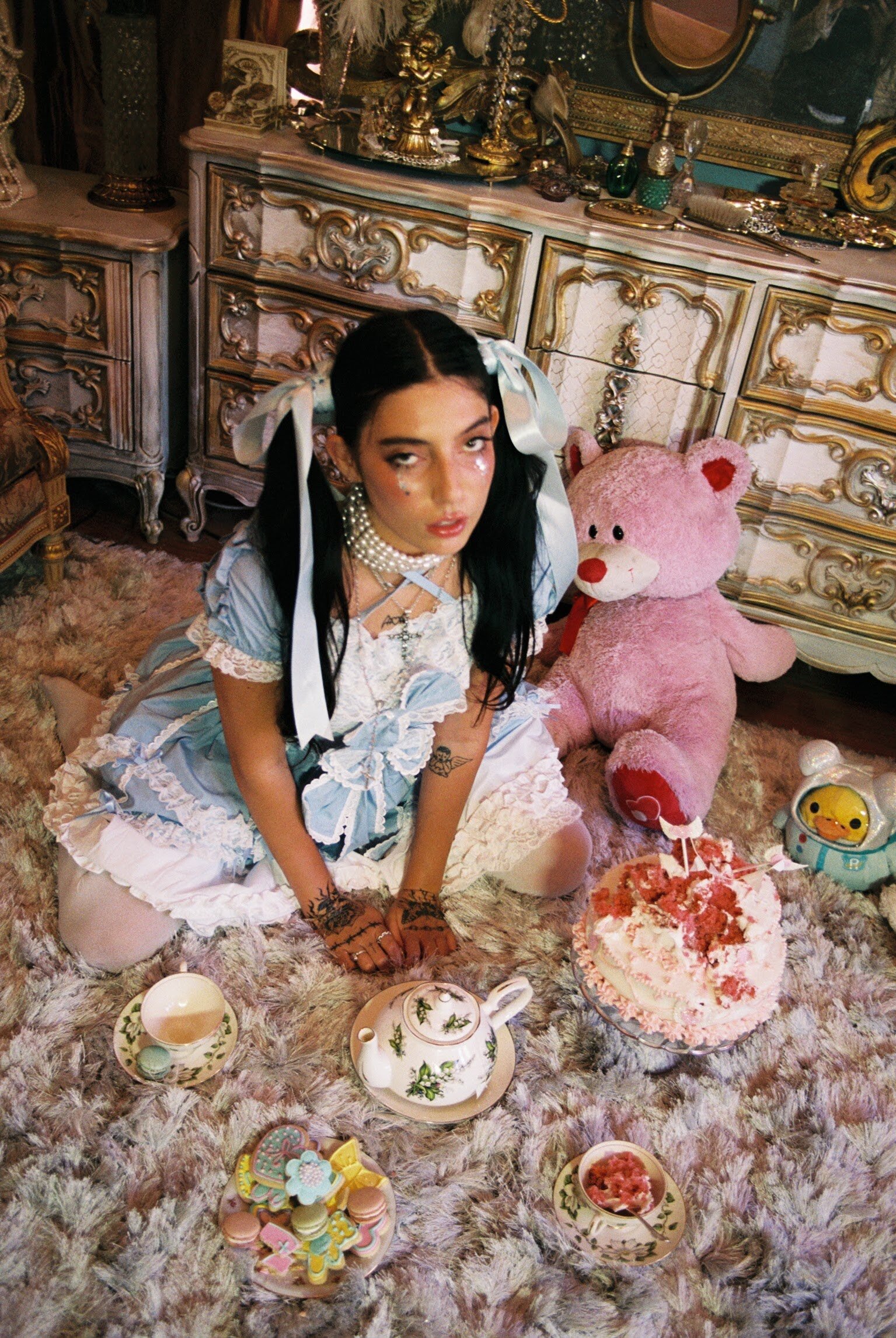