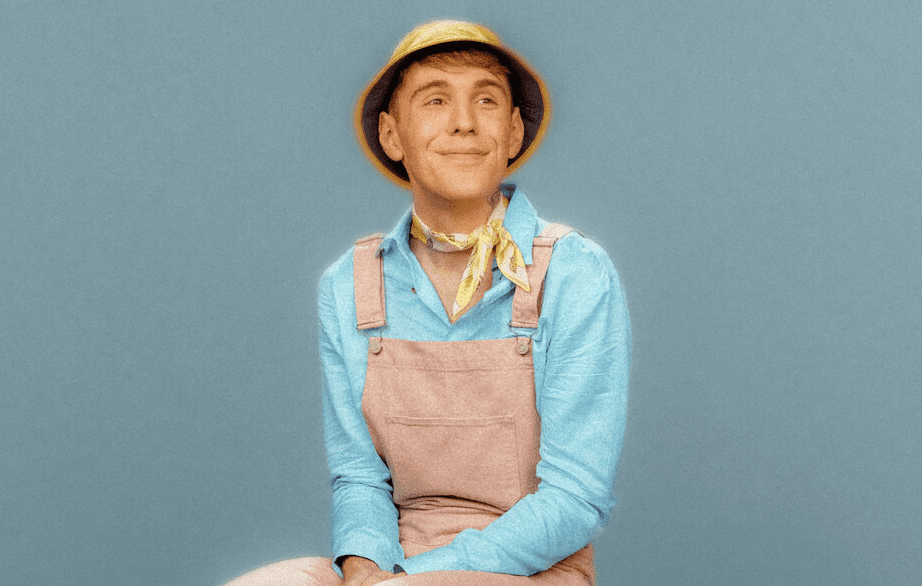 Yung Bae only started taking music seriously at age 18, and he’s already signed to a major label. Real name Dallas Coton is in his own lane, spearheading the vaporwave movement and paving the way for future funk as a mainstay when it comes to genres in the music industry. Hailing from Portland originally, the producer/recording artist now calls Los Angeles home — and he’s loving every second.

Growing his niche fanbase through the wonders of the internet and social media, Yung Bae exploded with his viral single titled “Bad Boy” featuring bbno$ and Billy Marchiafava. Earlier this year, he unleashed an alternative version with the one and only Wiz Khalifa and rising pop artist MAX. Beyond the music, Coton serves as inspiration that you can make your dreams come true if you follow your heart, work hard, and stay true to yourself.

From anime-themed Tumblr memes to shutting down stages across the world, Yung Bae has an extensive catalog of 6 albums and numerous EPs, including his debut project Bae. Most recently, he tapped Marc E Bassy for his newest single titled “Revolving,” which he deems his favorite song to date. Flaunt caught up with Yung Bae at the Kandypens house in the Los Angeles hills to discuss his rapid ascent in the music industry, what influenced his unique sound, how he got his name, “Revolving,” goals, and more!

Being from Portland, what were you seeing growing up?

Not a lot, I grew up off of whatever my parents were listening to and that whole scene. I didn’t get into the music scene until I was 18, so I was very late to everything. I always loved music, we always collected vinyl so I always had that around. I thought “oh, I love this old school stuff.” Going to concerts and all that, I was 18. I’ve been to 4 in my whole life.

I don’t know, apparently I went crazy right? I’m like “I gotta go to shows.” That’s when music really got interesting.

When did you first fall in love with jazz, funk, disco, etc.?

It’s what I grew up on. My parents were into a lot of Yacht Rock, The Doobie Brothers, Steely Dan type stuff. That’s all I grew up on. When I heard some Madlib track, holy shit he’s a god. How is he playing 80 instruments? Somebody said “no, you have that on vinyl. He can do that.” I’m like oh okay.

How did you land in this lane of Future Funk?

It’s a really weird lane, it derives from Vaporwave they call it. It’s super fucking weird. It’s pitched down, slowed down, reverbed out 80’s songs. That’s it, really pitched down. If you have seen those Roman style stuff with the 90’s looking food courts, that’s the whole genre. People like the nostalgia, that always hits home for everybody.

What nostalgia does it bring back for you?

It reminds me of being a kid since I grew up on a lot of that music. It’s always fresh in my head, easy to associate.

2 years after I started, I realized I could live off of it so that’s good enough. I started right when I dropped out of college, which I probably should have started before I dropped out (for a better reason). Right then, I started making music for fun and it did its thing. I went full-time.

When did you first get a little bit of money in music?

A couple years after I started off, off of Bandcamp and everything. A couple years after touring started, oh wow I can actually do this and say I have a job. [laughs] I was surprised too, honestly it’s all Bandcamp. Vaporwave and that scene thrive there. Obviously there’s the pay what you want, so they’re all about it there.

The original “Bad Boy” has over 50 million streams, talk about the song’s success.

That one was super unexpected because we made it on FaceTime in 30 minutes. I had the beat, gave it to him. He said “my grandma’s here watching me record this, check it out.” It started going at first, then last summer started exploding. It was a slow burner, but hey!

What did TikTok do for the record? Over 2 billion impressions across 1 million videos.

TikTok honestly did wonders for that track, it’s crazy how important TikTok is now. They want me to be active, I don’t get the humor of it per say. Some of those kids take the selfie and lip sync… what?

What role does social play in your career?

It plays a huge part. You look back at the 70’s where it was all word of mouth. Shit, that’d be so weird now having to actually use word of mouth. Even having people find you on Spotify with no recommendations, social media is everything.

How often are you on?

Sheesh, too much. [laughs] I love the feeds on Twitter. I’ll see the dumbest stuff I’ve ever seen in my life on there. TikTok, I’m slowly getting into. The algorithm or whatever they do, I’ll watch a cat video and my feed will be cats for a month. How? It won’t even say cat in the video, they’re like an FBI agent.

How was getting Wiz Khalifa & MAX on the remix?

Super easy. Wiz and I had the same lawyer, he reached out and said “here’s this track.” Then MAX, I’ve known years. I asked “hey man, you want to cut this real quick?” He was down. MAX is blowing up right now, oh my gosh. He just put out an album. He has SUGA from BTS on a track so [snaps] straight to the top.

You wrote “Revolving” one year ago, who or what inspired this?

It started on a tour bus. We were really high, I started chopping up a sample and it became that. It took a year to come out because we had a sample clearance issue where we physically couldn’t get a hold of people to clear it. We’re replaying it and writing different melodies, nothing’s working. Literally we’re going to put out a different version last week. Days before the track dropped, they’re like “oh it’s cleared.” We had to swap it out. I just wanted to get it out.

And no one knows you go through that on the backend.

No. If they knew it was literally a year long process… I can’t even think of people like Kendrick trying to clear a sample.

He’s so cool. It’s almost like fuck that guy, he came in and did it perfect. He did it in one take, dude why? I think he’ll be big. Sounds like he writes a lot too, so that’s smart.

Why’s this your favorite song to date?

This one was a very fun song to make. It feels more mature for me, almost like dark disco. Almost dark, but happy. We wrote it with a fun group of guys: my friends Alexander Lewis, Brandon Colbein. It was a guys day, it was fun with all of us in there.

90% of the time I need my computer. I’m going to be weird and say AirPods, AirPods always because that’s what I produce on. It’s the best reference because 50% of people will hear it like this. I always have either coffee or matcha, always. Then my weed pen. Girl Scout Cookie keeps me going, all day.

Talk about the dog you’re holding in your cover art, is that yours?

I don’t have a dog. I want a corgi, that dog was so cute. We were actually struggling to find a corgi. Originally, we had an image idea of a golden retriever and a golden retriever puppy. We’re all on a tandem bike and the puppy’s going to be in the basket on the front. We couldn’t find that. We found one, she’s been in a bunch of commercials. They brought her in, she could do all these tricks. How?

Do you take him with you to the studio?

I do. [laughs] I want to take him everywhere, that’s the goal.

Speaking of, goals for yourself?

I want to finish my album completely, get that out. Really want to do a collaboration with Donald Fagen from Steely Dan. I’m pretty comfortable right now, I’m happy. 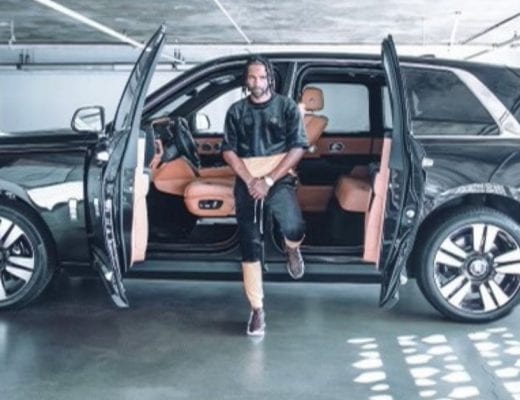 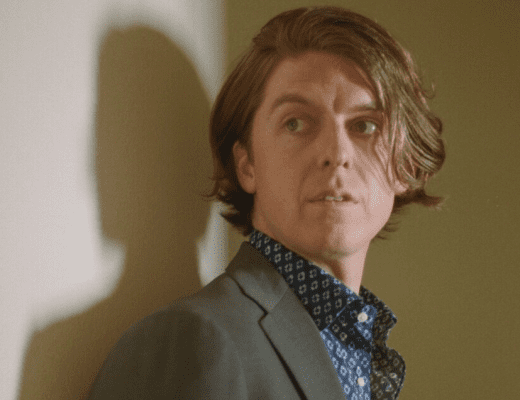 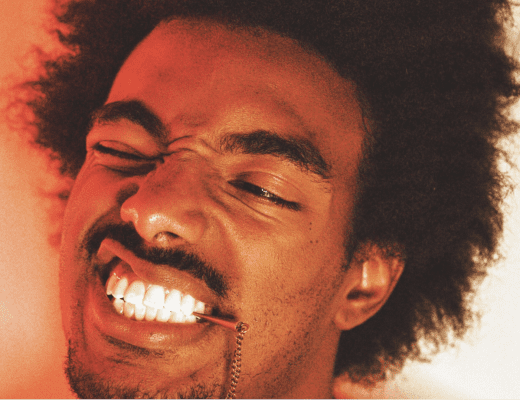