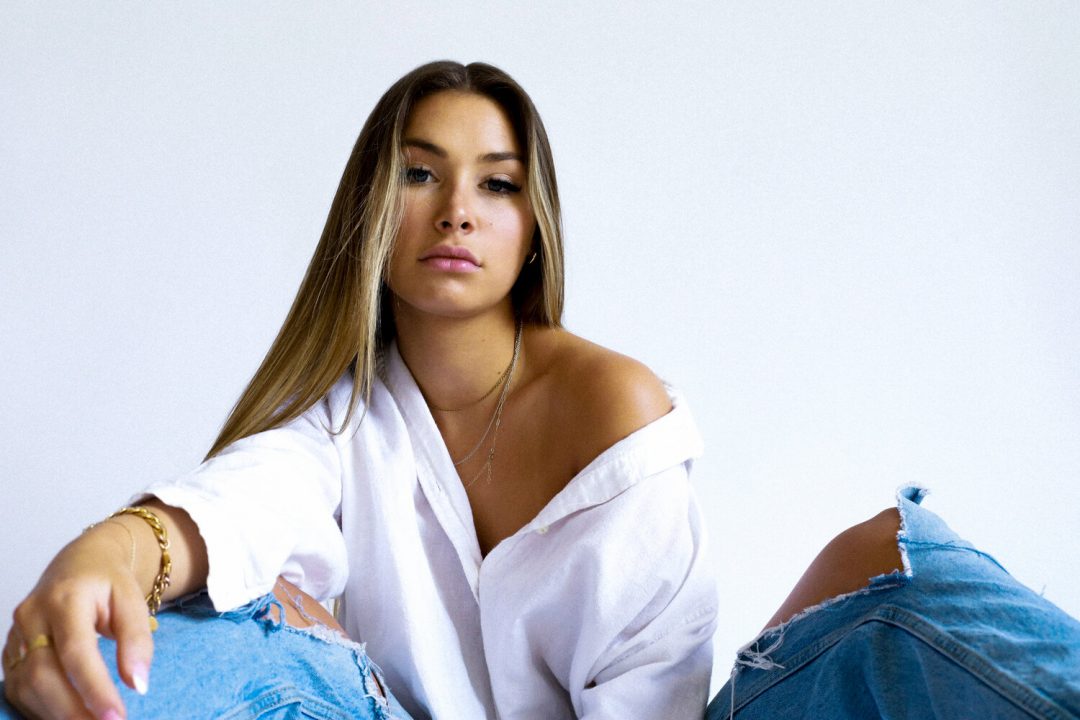 Ally Barron is here to take over the music industry once and for all. The singer, songwriter, and actress hails from Los Angeles, previously doing pop music but now diving headfirst into the R&B world. Additionally, you may recognize her from the reality show Malibu Surf on AwesomenessTV, where she even contributed the record “Moving On.”

“I miss acting, which I never thought I’d say. I was not an actor at all before I went into that, then I fell in love with it.  I’m an R&B artist who just got out of college and is making her way into the artist world now. I was doing a little bit of influencing for a while because of the show, but we’re ending that period of our life now,” she adds with a laugh.

Now stepping into her full potential as an artist, Barron goes full-force with her newest single titled “T-Shirt,” inspired directly by a toxic relationship.

Flaunt caught up with Ally Barron via Zoom, who revealed she was busier than ever with post-grad life. Read below as we discuss graduating from USC, roots in SoCal, biggest influences, the inspo behind “T-Shirt,” passion for fashion, studio essentials, goals, and more! 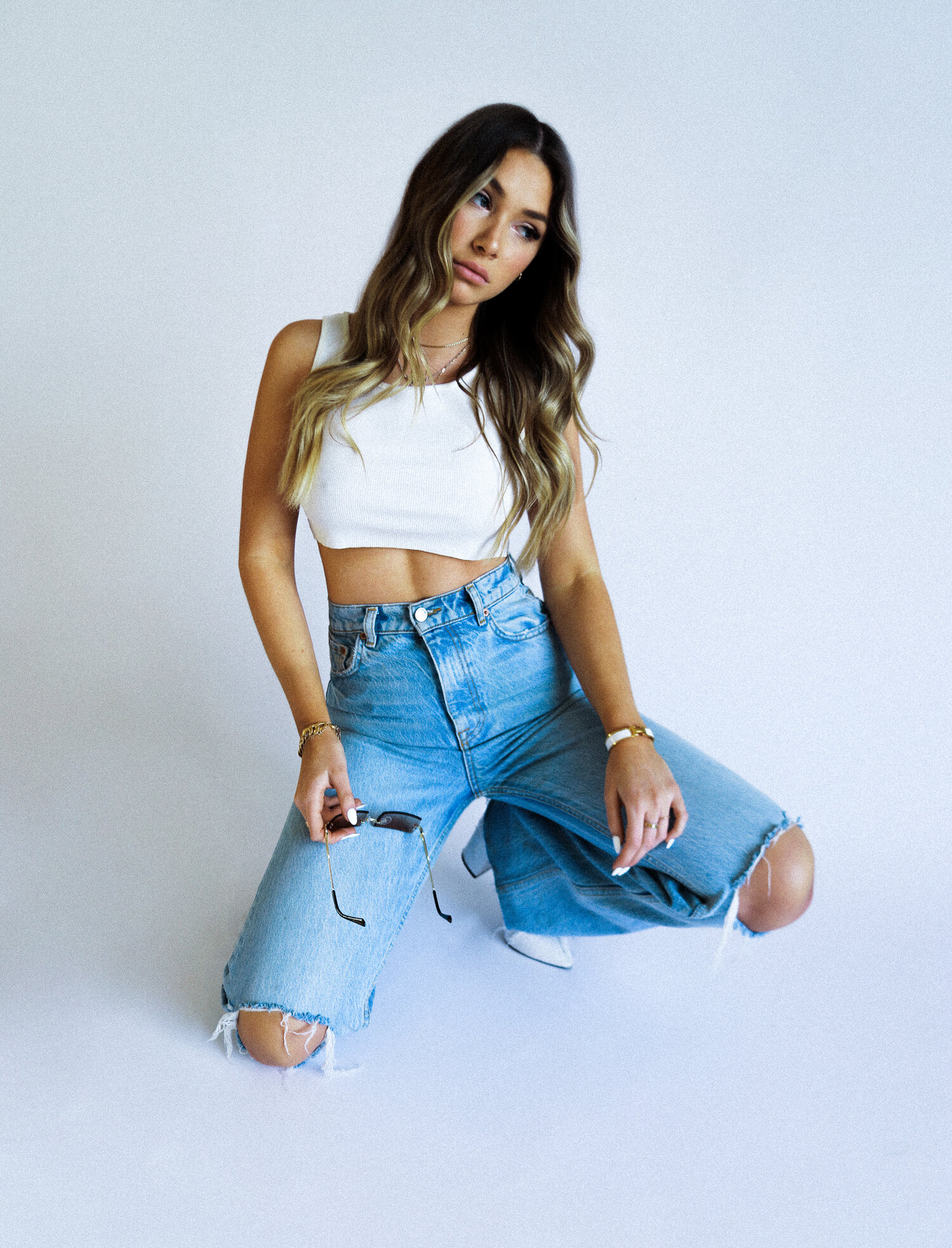 That sounds so beautiful! How excited are you?

I’m stoked! I know I don’t look excited right now, but I’m so excited. My sister’s been living in Santa Monica for forever and we’re inseparable, so I’ll be right down the street from her now. Will definitely be easier.

Thank you! It feels absolutely amazing. I’ve been in school for the last 18 years of my life and it’s finally over. It’s weird, I don’t know what to do with myself.

What did you study at USC?

Music industry, it was good overall for everything I’ve been doing for my job. It was cool learning the business side, because I’ve been on the artist side of it. It was interesting to see the business aspects that goes into it. I had a job on the business side for a little while, it was not for me. Back to my artistry, here I come.

Being from Westlake Village, what was that like growing up?

Westlake Village is 43 minutes north of Los Angeles, Thousand Oaks for people who don’t know where Westlake VIllage is. It’s right next to Calabasas, outside the Valley. Growing up was fun, I literally love LA. It’s funny seeing all my friends moving to different places right now, I’m never leaving LA. LA’s home for me and I love being a part of the city. It’s a suburban area where I was living. I was outside the city, but close enough drive to make it to the city. My parents would take us to the city and have outings when I was little, it was really fun. I love the city, I’ll never be leaving LA.

I love Rihanna growing up, which is weird because she has very mature songs. I don’t know why I went to so many Britney Spears concerts when I was a kid, I went to 5 Brittney Spears concerts. She was a huge influence to me growing up. I was second row Britney Spears when I was 5. [laughs] She’s a huge part of my childhood. Rihanna though, musically, was a big influence for me, I loved her R&B but pop-y vibe. In high school, Alessia Cara was the reason why I wanted to make the music that I made. She came out with a song called “17,” I was almost 17 at the time. I literally related to every word to all her songs and I fell in love with her. She’s my biggest influence artistically. For some reason, my genre of music I listen to all the time is songs I can sing or songs I want to sound like. She’s a big influence on my music style.

“T-Shirt” is out, how are you feeling?

It feels good to finally have it out. That was a mess trying to get that together, but I’m stoked. It’s by far my favorite one on my EP, which is a whole other issue we have going on right now. There were supposed to be 5 songs on the EP, now we’re making another one. It’s a giant mess with the busyness that’s been going on.

You get to dictate what you want, so that’s good.

Yeah, that’s why it’s nice being independent and having all the creative freedom I get to have. But it’s definitely stressful because my mom’s my momager and she doesn’t know the music industry at all. It’s her dealing with the bullshit and me navigating my whole career by myself, which is a little bit stressful at times. It’s definitely fun. “T-Shirt” was a very very fun song to make, but it took so long.

Why did it take so long?

I had a writing session with my co-writer. We wrote the lyrics then changed the melody and production of it 4 different times, which is truly the hardest thing to do when you want to keep the lyrics. Everytime you change the melody, normally you’d change the words to match it. I said “I love these lyrics and I want to keep them.” It was one of the hardest things to do but I’m so happy with the way it turned out. We got it finally, after the fifth time of trying to figure it out.

Who or what inspired the record?

It’s so funny because I always write songs that are about specific situations, but this one was a little more of a metaphor based off of a situation that happened. Literally, I had one of my exes leave a t-shirt in my room. I had really long relationships all through college. I had 3 previous relationships and I’m finally single, the first time since my senior year of high school. It was funny because my friends would be bringing these guys home, I’d joke all the time and say “this t-shirt is literally the only thing I’ve had in my room all semester.” You all have been going out and having your fun, I’ve literally had my ex’s t-shirt in here. It was a metaphor to be able to let go and give him his t-shirt back. I literally gave him his t-shirt back, “by the way wrote a song about it.”

I told him that it’s a metaphor and not to think that it’s about him. I said “You probably won’t be happy if you listen to the words and think it’s about you, so it’s not about you.” It was a situation that happened that was true, but more of a metaphor for letting things go and moving on from the past. You have to release the things that are holding you back from moving on. That was how “T-Shirt” came about.

Can we expect a video from the record?

I don’t think so. I get that question way more than I thought I was going to. When I released the song, this was the one that I wasn’t going to do a video for. I don’t know why. Maybe at some point we’ll make a lyric video, but I don’t see a big music video.

I love shooting music videos. It’s fun coming up the idea and everything, but the timing with the end of graduation wasn’t fitting for this song unfortunately. But I would’ve loved to make a music video, it’s one of my favorite things to do: coming up with the idea for it and seeing it all come together. Seeing it come to life.

The most rewarding thing for me is knowing I’m not alone in the situations that I experience. I love that people can relate to them. Even when I wrote the song “Just Friends,” it was for the show and wasn’t really something written for my true life at the time. This song has literally helped me get through the situations that I’m also experiencing, knowing that other people aren’t alone for the people listening to it. One of the most rewarding things about music for me is being there for people, being that thing that helps them through situations and letting them know they’re not alone in the same situations.

Talk about your passion for fashion as well.

Honestly, fashion for me has been a cool outlet that me and my friends bond over, showing your own style. I’ve always been really interested in fashion, especially working with other brands. For the show, I got to work with Hollister and a bunch of cool clothing brands. That’s fun. Fashion’s always something I’ve been passionate about other than music and my typical life of hanging out with friends. I love fashion and the trends, staying on top of cool street styles.

How would you describe your style?

I honestly sway all the time. Depending on the day, sometimes I feel like putting on some Jordans and baggy jeans. Other days, I want to wear a sundress or a cute bandana top. I’m very all over the place, it seriously depends on the day.

What tips do you have to get over a relationship?

Short-term goals, yes. Finishing my EP and releasing it, dealing with all the post release stuff and marketing it well. The first 2, I really dropped the ball with really being in school and dealing with all that stuff at the same time. Long-term, maybe getting signed at some point and starting to do live shows. That’s always been a huge fear of mine, singing in front of people. Definitely have to start doing live shows because that’s a part of the job now unfortunately.

I don’t know why,  I’ve always hated singing in front of people. Even when I was little, I’d never sing in front of my sister, my parents or my friends. I literally was the biggest closet singer. One day I said, “Mom I want to try out for X-Factor.” She said “what the hell?!” So I did that. From that point on, I did American Idol. Didn’t make it past a bunch of rounds, but I made it past all the the executive producers. I said “I love this, I want to start singing.” I always hated singing in front of people, it’s always been a huge fear of mine. I get nervous and shaky, then I sound terrible. We’re getting over it now! Conquering my fear.

Look out for the new EP, there’s going to be so much coming. I’m so excited. Definitely a different sound than I’ve had in the past, I’m very excited to share it. 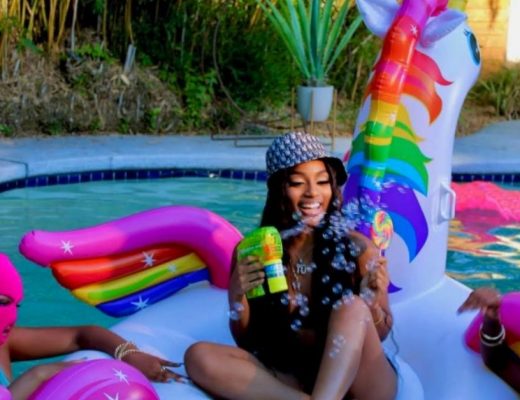 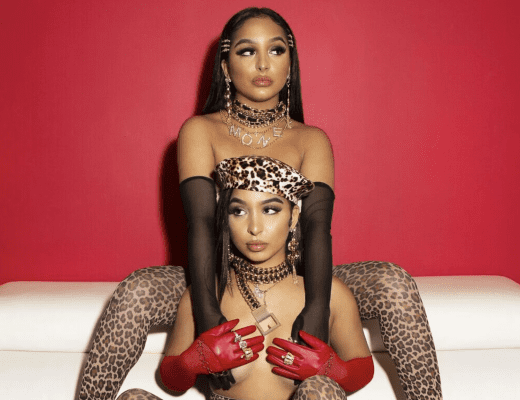