If you’re not familiar with Salma Slims, prepare to fall in love. The singer, songwriter, rapper, and model describes herself as “that bitch,” a girls’ girl with a knack for spitting bars, creating bangers, and taking flawless photos. Boasting herself as the “Runway Rapper,” the Atlanta native gives inspiration and motivation to women around the world to stay classy, stay confident, and go after your wildest dreams.

An anomaly in the music industry, the rising star was born in America to Muslim immigrants, a proud first generation African if there ever was one. In fact, her parents came to the States with high expectations for Salma, hoping she’d become a doctor, lawyer, or teacher, any of those jobs that pay salary.

Salma states, “They really came to this country to have me because of those reasons, so me being a rapper now and a model, it’s not what they were expecting. But they’re finally like ‘Wow, look at everything she’s doing. We believe now’.”

Serving as the first lady of Private Club Records, Salma continues to perfect her craft and do what she loves on the daily, which is create music. Most recently, Salma released her newest single titled “Ennie Minnie,” with a cinematic visual to match.

Flaunt caught up with Salma via FaceTime, who was posted in Atlanta revealing she had to come back to her roots in the city. Read below as we discuss growing up in a Muslim household, biggest influences, her dad being locked up, where the Runway Rapper originated, “Ennie Minnie” being her TikTok song, shooting the visual, her forthcoming EP, being an independent artist, new merch and cosmetic line, and more! 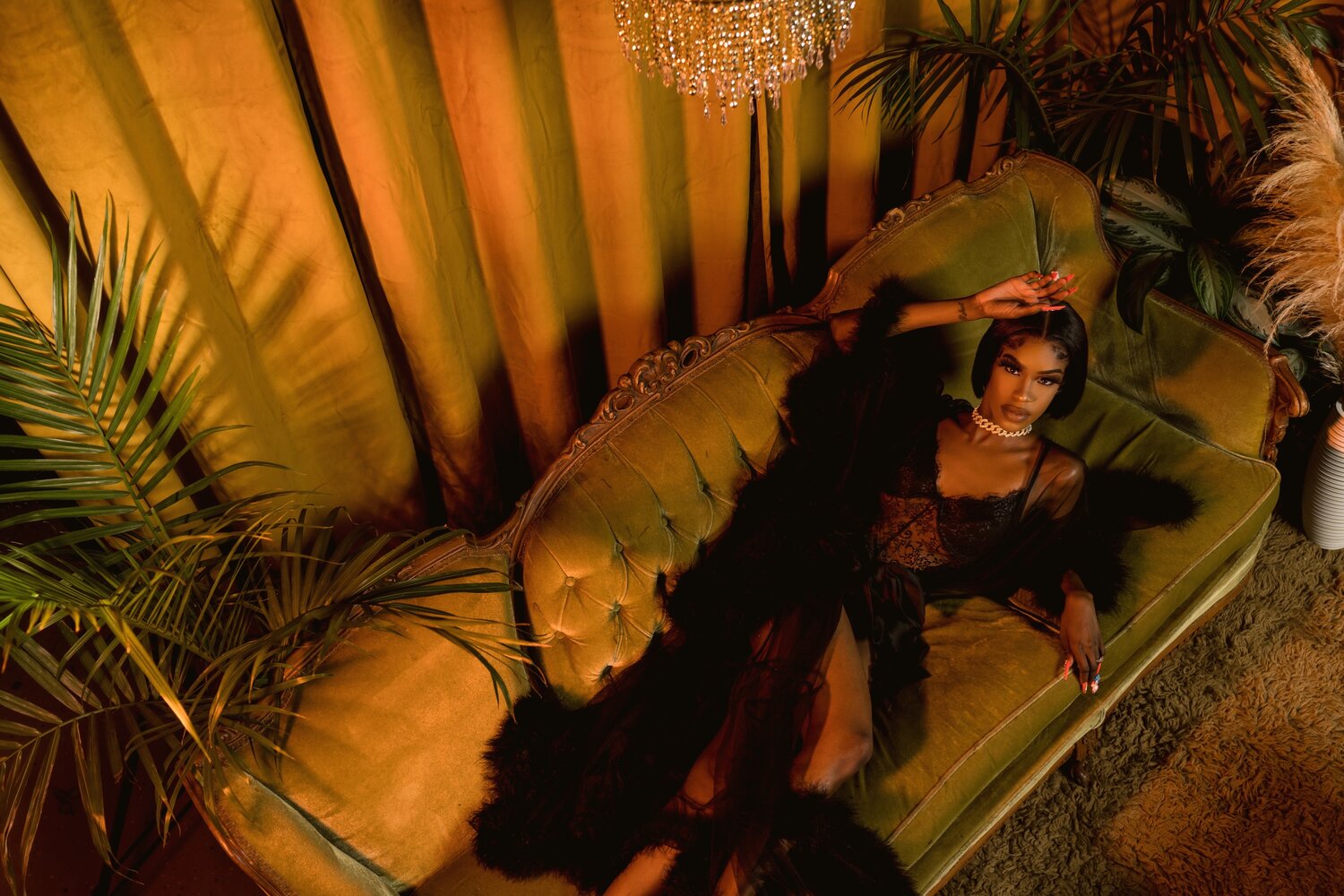 What was the reality of growing up in a Muslim home?

It was really hard growing up with Islamic parents, because their expectations of me were really high. Especially in the religion of Islam, you don’t really see a lot of Muslim people rapping, singing, being a dancer or along those lines. Really what you see is very modest, they’re very modest. For me to step out of the culture… it’s really set so high for me to be a certain way in Islam, and I’m not that. Growing up in the neighborhood I was raised in, it wasn’t like that. I wasn’t seeing people at school with hijabs on, I wasn’t seeing none of that. But what I did know how to do was rap, and I used my talents since I was 16 to rap.

Biggest influences that made you want to rap?

I listened to a lot of old school hip-hop and a lot of old school R&B. My influences are Lisa Left Eye, she’s the reason I started rapping. I saw her with TLC. I went to a TLC concert when I was 13, I said “Damn, that’s what I want to do. Look at her, look at how she puts her bars together.” She was so different, outside of the box from a lot of female rappers that’s out here. She’s one of my biggest inspirations. Da Brat, Lil Kim, J. Cole, Jay-Z, Nas, those are the type of artists I used to listen to all the time.

Your dad was locked up during your teen years, how did that affect you?

My dad wasn’t around for a long time in my life. My 8th grade year, he’d gotten locked up. My dad had a lot of money growing up, so around my 9th grade year, I was noticing “Damn, my dad not around. I don’t see him a lot.” He was the right-hand-man to the president in Gambia, in the country where my parents are from. It’s a dictatorship that goes on over there, so he had a whole bunch of businesses that got taken away. He was gone, so I didn’t have a male influences in my life. I was running the streets wild, doing whatever the fuck. Not having that father figure. That’s really when my rap shit started taking off, around the time when he was locked up.

Why are you the Runway Rapper and what does that mean?

2 years ago right before I had signed to MadeinTYO and Private Club, I literally said “Okay, I’m a model and I’m a rapper. How can I blend the 2 together so people won’t be confused: is she a model or is she a rapper?” I was doing a lot of runway shows, blending both of the worlds together. Runway rapper is more a lifestyle, it’s a bossy lifestyle of being confident, classy, owning up to your shit. The whole EP started because I’m a model and a rapper, I was on runways and I was rapping so I put it together.

“Ennie Minnie” out now, how are you feeling?

I love “Ennie Minnie”! That’s my TikTok song, that’s my shit. I was in the studio with Drumma Boy when I made that song. I like having fun when I’m in the studio. When I went in the booth, I said “Ennie Minnie Sisalini” It’s a lot of mini-me bitches out here so I needed to make a little classy, cute song to show them girls. [laughs]

What was the vibe with Drumma Boy? It was in Atlanta right?

Drumma Boy is my brother. We linked up, got in the studio, we knocked it out. I creative directed the “Ennie Minnie” video. I collaborated with my boy G Shot, the director. Literally every video that you see of me, I have some type of creative input in it. Whether I’m styling myself, whether it’s the creative direction behind the video, what I want to look like, the aesthetic, that’s all me. I gave him my idea then boom, he put it together.

What was the highlight from shooting that video?

I love when it’s 2 of me because it shows you there’s 2 Salmas. There’s the calm, collected, swaggy Salma, then there’s the turnt up, bitch-get-out-of-my-face Salma. It’s 2 of me going back and forth with myself, you can see little glimpses of that in the video.

This is hard. I used to shop in the thrift store all the time and put outfits together. Now, everything I wear, everytime I step out, I think of being on the runway. Everything I do is over-the-top. Somebody can invite me to a party, they ask “What you wearing?” I’ll say “Don’t worry about what I’m wearing because I’ma come overdressed.” I’m that girl that comes overdressed every time. My style is over-the-top, classy, chic.

Right now, I’m working with PrettyLittleThing heavy. My favorite brand is Vetements, it’s a UK brand. I like a lot of streetwear brands too, like Ethika. I wear so much shit, it’s crazy.

You’re dropping your merch line, what can we expect?

I’m dropping “Ennie Minnie” merch. I’m dropping “Not Friendly” merch. There’s a line that everybody loves right now in the “Not Friendly” song: “I’m tryna buy the building, fuck the Birkin. Ask my bitches, I’ve been working.” That’s going to be on a t-shirt real soon.

What about your cosmetic line?

My cosmetic line Runway Rapper is on the way. I’ve been working day in and day out to get the right formulas. I’ve been in the factories working with them to get the right blend of lipsticks and foundation, so they can expect that really, really soon.

3 things you need in the studio when you record?

I need some weed, some wine. I smoke, but only in the lab. I need wine, a preroll, and one of these. [points to vape pen]

How was it linking with Chanel West Coast on “Eazy”?

Chanel is so fucking lit. One thing about Chanel, she’s a girls’ girl. I performed at this Galore girls cult Festival during Coachella the year before the lockdown happened. She saw me perform, literally came up to me and said “Yo, why the fuck don’t people know who the fuck you are? Are they fucking kidding me? You can rap so good, you got so many bars. You just need the right label behind you, you’re fucking lit!” She said “I want you to get on a song with me,” but it wasn’t until the year after that she asked me to hop on a song. I’m like “What? Girl, you lit!” [laughs] I love her, I’m performing with her at Rolling Loud.

How excited are you?

I’m excited. I was on Rolling Loud for 2 years in a row. This year I wasn’t on the ticket but she’s bringing me to pop out with her, so I’m on that bitch! [laughs]

How does it feel to get back on the stage?

I can’t wait. I’m about to be in rehearsal because it’s been a minute.

What can we expect from your new EP?

You can hear a mixture of everything. I’ve got shit for the girls. Definitely the shit that I rap about, guys can definitely relate to it. I’m talking about real life stuff I’ve been through, and I’ve got some turnt up shit too for the summertime. I’ve got a single with Too Short that I’m about to drop.

How was working with Too $hort?

I dropped 2 songs this year: “Not Friendly,” then I dropped “Ennie Minnie,” but both of them charted. That shows me that I gotta keep going. My fans are really listening and really streaming, whether there’s a big bag behind it. I’m independent right now so whether there’s a big label behind it or not, God’s showing me that everytime I drop, it’s still going to a chart. “Not Friendly” was #64 on the charts, “Ennie Minnie” was#98 on the chart right under Bia’s “Whole Lotta Money.” That showed me I have to keep going and keep putting my foot on their necks, keep grinding it out.

What is the reality of being an independent artist?

Man, it’s been hard because all my hard-earned money is going into investing in myself. I was signed to MadeinTYO’s label Private Club, so a lot of the situations I was in was with his label. Now that I’m independent, I can really do my thing. I don’t have to wait for a machine to push it or be in the backburner. He’s on the front so everything’s a little harder working with that situation, but now that I’m independent I can do whatever I want. My fans can get the music whenever they want. I can put out content whenever I want and do my own thing.

Salma Slims is on the way. I’m up next. I’m up right now and that’s period!