HONNE stands for a Japanese word (本音) meaning “true feelings,” which is exactly the type of energy the British duo brings in their music. Hailing from London, the electro-soul pair composed of Andy Clutterbuck and James Hatcher have established themselves as a household name in the electro-indie scene, taking pride in their talents of writing, recording and producing all their own records.

Going on 7 years since HONNE stepped onto the scene, the guys state, “We’re old timers now. I guess a lot of people would describe our music as electronic soul, so we try to write music in a classic songwriting style but with an electronic twist.”

With smash hits such as “Day 1” and “Sometimes,” HONNE carves their own lane within the music industry, with feel-good lyrics and accents that evoke emotion, feeling, and passion. With an international fanbase that’s growing on the daily, HONNE returns to unleash their newest single titled “What Would You Do,” recruiting R&B star Pink Sweat$. The release stamps a new chapter for the UK-based duo, who have to date amassed over 2 billion streams across all platforms.

Flaunt caught up with HONNE via Zoom, who were posted in London where it was raining. Read below as we discuss their roots in South London, how they met initially, connecting with Pink Sweat$, acting debut in “What Would You Do,” forthcoming album, favorite song to perform, goals, and more! 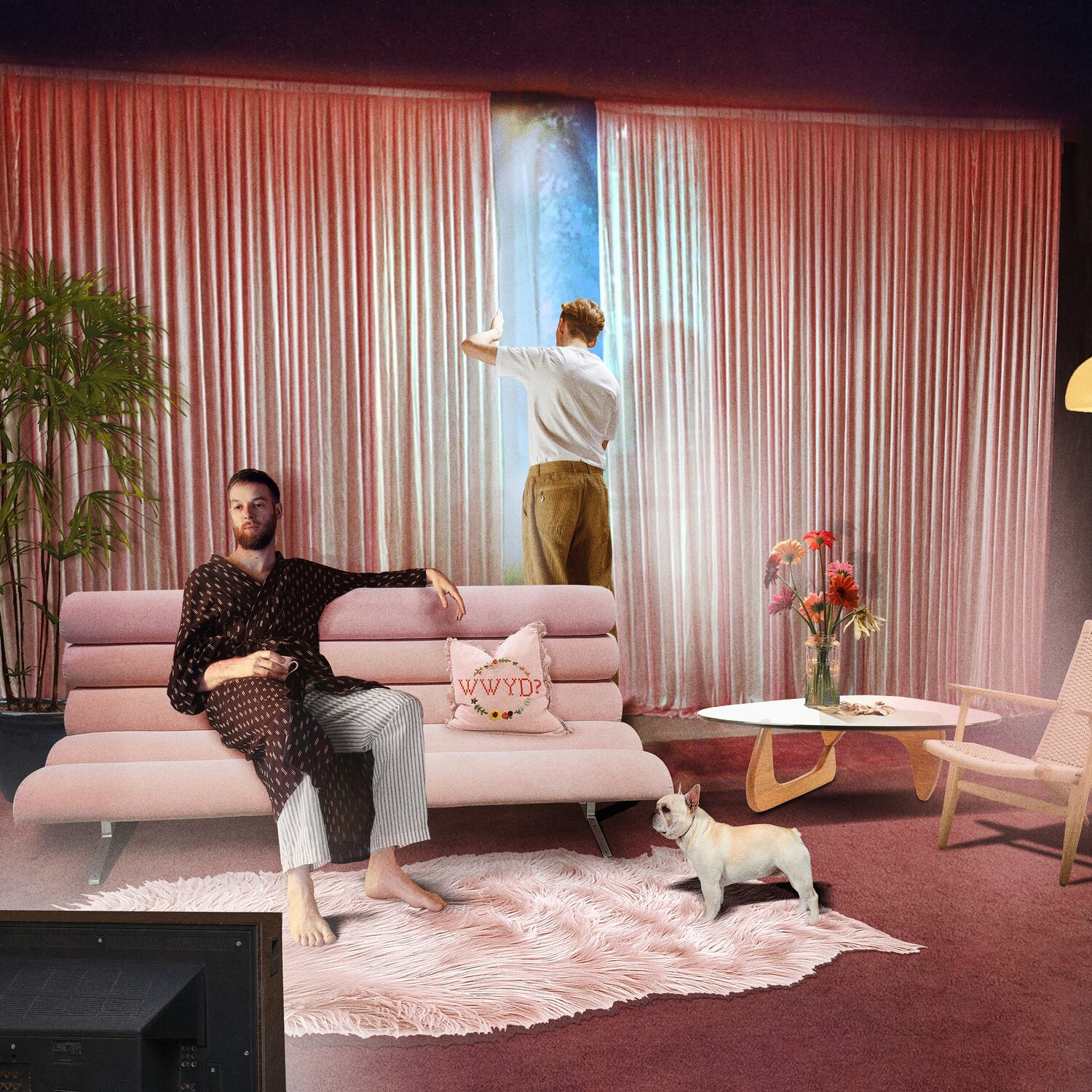 Being from South London, how does that play into your life and career?

Andy: We grew up in what we’d call the West Country, outside of London in the fields with animals and lots of other stuff. That was quite nice. It was only later on in life that we moved to London. For me, I grew up on a farm, so I was longing to move to something a bit more hustle and bustle.

James: It was good for both of us in terms of being able to make noise. Andy had a loft in the house, in his family home he had a loft. His dad also played guitar and had a massive PA system. [laughs]

Andy: Like a festival PA system in there, I don’t know why we had it. We could make a lot of noise and not disturb any neighbors, so that was good.

James: My mum’s also called Shirley. She and my dad both loved music, so they’d vacate the living room on Saturday during the daytime. Let me and my mates make drum kits, guitar runs, everything and jam. One of my favorite memories of my mum, she’s in the living room under a blanket. Me and my mates were doing band practice, she stayed under the blanket and was requesting songs for her to sing on the microphone.

Andy: So we met at university. We were the first people that we met, we didn’t know each other before that point. On the first day, we rocked up. There James was. There I was, very shy. Well not very shy, but very nervous. Oh God, who are all these new people? We got lucky and we got along. We started writing music within a couple days, it was a quick turnaround.

Andy: It’s developed over the years. It started off quite lo-fi and very nocturnal. As we’ve gone through different albums, it’s developed. The second album was a bit more upbeat, more hip hop. Our third mixtape was almost not folky, but quite acoustic and traditional.

Andy: The new album, at least the first song that’s come out is a bit more poppy. It’s our pop debut, or at least our take on a pop album.

“What Would You Do” with Pink Sweat$ out now, how are you feeling?

James: Feeling good! It’s exciting. It’s always a little bit nerve-wracking putting any new music out, but we’ve been sitting on this one. We wrote this before the pandemic in LA, in February 2020. We had no idea it was coming. The first line is “let’s just say the world is ending now, what would you do?” Which became very relevant, because ever since then it’s felt like the world’s going to end.

How did you guys and Pink Sweat$ tap in?

Andy: We’ve been friends with him for a while. I know he’s relatively new as an artist, only been going for a couple of years. But we have similar fanbases. He does quite well in America obviously, but also Indonesia which is one of our biggest markets. He’s got a few huge songs over there, we’ve been aware of him from that. We got in touch. We got on FaceTime with him and said “would you like to sing on our song?” He said yes, so that was nice. He came back with his own verse, we’re so happy with it because it’s awesome.

So it wasn’t recorded in the studio together?

Andy: We’d love to do it in person, but with everything going on it was impossible. We left him to it. We gave him some guidance but he said “I don’t need your guidance, I’m doing my own thing.” We’re thankful that they did.

James: We’d already written the verse, so we asked “can you sing this verse?” He said “to be honest, I don’t really sing verbatim.” We said “okay, I’m not sure what that means but do your thing.” He wanted to do my own thing and put his own stamp on it.

Andy: We’re really, really pleased he did because it came back better than what we had before, so that’s cool.

What was your reaction when you got his vocals back?

James: I was like wow. It’s quite rare you get something back and you actually really like it. Sense of relief.

Andy: Hell yeah, it really made the song come alive. It brought a lot of energy and a new vibe to that section.

James: It was dope, it already felt like an American tune. We wrote it in LA, it had this American vibe and feeling to it. As soon as Pink Sweat$ put his verse on it, it cemented it and put it in concrete.

Talk about the message in the song, what do you hope fans take away from it?

Andy: Before it came out, we teased the lyrics. We announced on social media, the lyrics “let’s just say the world ended a week from now, what would you do?” So asking that question, it’s become really clear and poignant, there’s lots of things people would do in that scenario. But then we started asking, well why don’t you do those things now? You don’t have to wait for the world to end in order to come out to your parents, whatever it is. There’s so many things that are very meaningful for a lot of people.The message is why wait? Act on it now. Do it now.

James: It’s a very fresh sound for us. It’s the beginning of us stopping worrying about it as much, and trying to write whatever we feel like writing at that point. As an artist, it’s quite easy to start second guessing yourself. It becomes less and less enjoyable and more in that pit you get. It’s a liberating feeling: let’s write songs we think are great, that we think are cool and hope people like. That’s it.

Andy: The inspiration is Bad Santa which I still haven’t seen, but I’ve seen clips of it. It’s this little kid who gets bullied and has this relationship with Santa, that’s really got nothing to do with the video. We wanted the video to be about this young kid who happens to be the only one told that the world’s going to end in a week. Because of that, he goes on a bit of a rampage. Gets a bit of revenge, tries to woo and impress the girl that he’s always fancied. It’s this light-hearted, funny thing that features me and James for the first time with cameos in it. It’s nice to be in our own music video for once.

How did that feel?

Andy: It was good. I’ve done it before. Being on the set of music videos is the most fun thing in the world.

James: We’ll be doing more of it.

How was your acting debut? Best memory?

Andy: I like dressing up. I played a paper boy, that’s why I got to ride around on a red bike with newspapers, a hat, glasses and some really terrible brown corn shorts that I quite like in secret.

James: My favorite thing was the director’s reaction to stuff. Our parts we’re playing are quite silly, and you knew you did a good job if he’s giggling afterwards. That’s something we were aiming to do.

What can we expect from your third album?

James: Lot’s of collaborations, we worked with quite a few different people on this record. Some people we’ve been developing relationships with for a long, long time and we’re so pleased that they’ve come off. We’re punching above our weight…

Andy: Quite severely with one of them.

James: We’re hugely excited about that, it’s our pop debut so it’s more immediate and accessible.

James: “Day 1,” because I like the groove. When we play live, we play with a full live band: drummer, bass player, backing vocalist, Andy and I. Our drummer’s got a fat beat on that one, I like it.

James: Some goals. We’ve gotten this far, without much radio play so I’d like to get some radio play. That’d be really nice. If it doesn’t happen, it’s not the end of the world. We’re here, we’re having a great time. What else? I’d love to do some touring again, that’d be a nice goal.

Andy: All the things we took for granted before, those are our goals now. We’d love to be able to live a normal life again: touring, seeing friends, seeing family.

What’re you most excited for with the world opening back up?

James: Getting thousands of people in one room singing our songs would be great.

Anything else you want to let us know?
James: Thanks as always. Wherever you’re listening from, whatever you’re doing right now, we want to say thank you and love you.

Andy: Our new single “What Would You Do” out now, and strut your stuff.