Amy Maghera is a true entertainer if there ever was one. Born in Milton Keynes, England, a young Amy was always surrounded by the arts, with her dad being a folk singer who frequently had band practice in the household. Falling in love with dance at an early age, she went from dancing competitions to dancing for the greats such as Kanye West.

While most may recognize Maghera from her roles in the film world, she actually began her career as a member of the girl band XSS. While dancing in a Bollywood film in Mumbai, she was scouted by one of India’s biggest talent agencies, as she dove head-first into India’s commercial, fashion, and film industry.

Fast forward to today, the multicultural actress is as excited as ever to be starring as a lead in Netflix’s feature film, Skater Girl. Shooting the movie proved to be a life-changing experience for Amy who traveled to the desert of Rajasthan into a remote village called Khempur, soaking up the beauty of the countryside while connecting with locals.

Flaunt caught up with Amy via Zoom, who was posted in Los Angeles where she has resided for the past year-and-a-half. Read below as we discuss her roots in Britain, moving to the States, her biggest influences, her love for acting, her first big break, playing the lead in Skater Girl, her favorite hobbies, goals, and more! 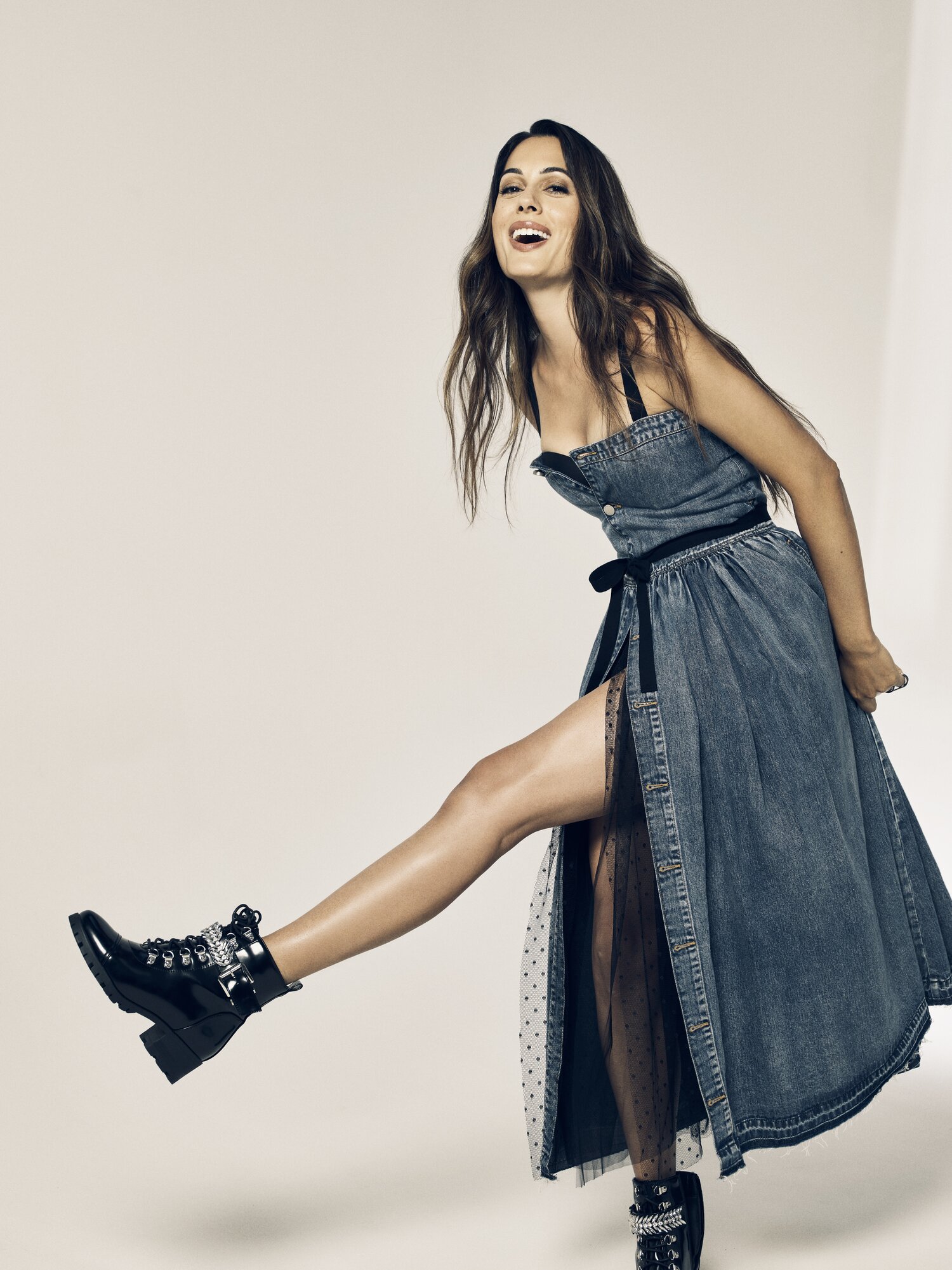 What brought you to Los Angeles?

I moved here just before everything happened with the pandemic, mainly for career stuff and work but also I just really love the lifestyle here. I initially came to LA on holiday to stay with one of my good friends. We rented a car and drove to Las Vegas. I said, “Oh my god, this is so fun.” I loved the weather, the energy, so much stuff resonates with me. I felt at home here, even though I’m not from here.

What was a young Amy like growing up in Britain?

I never ever thought that I’d live anywhere else. I guess your mind at the time isn’t that expanded to what the world’s like. I never could imagine I’d go on to live in India for five years or in America, so that’s been really crazy for me. I used to love dance as a kid; I’ve always performed in that way. My dad’s a folk singer and he’s musical as well, so there was always band practice in our house. I was always doing dance classes and dance competitions. You name it, I was doing it, just to keep me out of trouble really. [laughs]

I used to watch a lot of Michael Jackson. My brother and I would get up really early before school and we’d watch “Moonwalker” obsessively every single morning and be dancing in front of the TV. So definitely him. [laughs] I was influenced a lot by my dad’s folk music taste. Also the Beatles, I used to listen to stuff like that. There’s an artist called Betty Boo, she was really big back in the day when I was little. That was my first vinyl; I’d play it constantly and dance around to it. I used to really like Supergirl, the original Supergirl. I used to absolutely love that. Later on as a teenager I went through a band phase and loved bands like Blur and Nirvana and then I had a massive RnB phase and I loved artists like Aaliyah.

When did you know you wanted to act?

I’ve always loved acting and was always in school plays. To be honest, it wasn’t my forte going through school, I was more Amy the dancer. It took a while for me to develop the confidence to act and to even know what my emotions were and who I was inside, to be able to feel comfortable enough to express those emotions to people around me and to even give myself the permission to do that. That whole process took me a long time. In my late twenties, I was starting to open up a bit more in that way. Whereas dance, sometimes I wasn’t even aware of what I was feeling, but I was able to express something through my body.

For me, it happened in a bit of a strange and amazing way. One of my dance jobs was to go to India and dance in the background of a Bollywood film. I got an incredible opportunity because one of the agencies wanted to work with me and sponsored my Visa to go out there. It was amazing. I started doing lots of TV commercials and modeling for some quite big brands out in India. TV commercials were my first way into acting.

I remember working with a specific director on a Lakme commercial who said, “Why don’t you surprise us and improv? Put yourself into what you’re doing.” I was so used to just doing what was asked of me and trying to get it right but then I started to improv, and it was so fun! I thought what else can I do? How else can I incorporate my personality into what I’m doing? It was never really like “here’s a massive role for you, and it’s going to make you really big,” it wasn’t like that at all. Stuff happened in an unpredictable way that I could never have planned but I love that. I did a film called Angry Indian Goddesses. At the time, we had no idea that it was going to do well or resonate with an audience. Similarly I’ve done things that I thought were going to take off and then they didn’t!

Talk about what it was like to play a lead in Netflix’s Skater Girl.

I feel so lucky to have been involved in that film, so proud to be part of it. I remember auditioning for it. I was in Poland at the time doing another project. I got this audition and thought, “Oh my god, this looks great.” I did the audition in my hotel room; It was an improvised tripod situation. Nobody else spoke Hindi in the cast and crew so I thought okay, I’m going to try to do this on my own—pretend that somebody’s speaking my lines back to me. Then I really got along with Manjari the director of Skater Girl, like a house on fire. The next thing I knew, I was doing a chemistry read with Jon (who plays Eric) and then flew to India. It was incredible. I remember seeing the skatepark for the first time and being completely blown away with the fact that the filmmakers had made this, not only for the film, but for the community of the village. It’s amazing to see how the kids have responded to it already with their skateboards—they had five months of skateboard training before the film and were just phenomenal. They were zipping around the bowl and jumping with their skateboards over loads of other stacked up skateboards. It really took my breath away to see that, I can’t believe these filmmakers have done this with such passion and such care. It’s really changed the lives of so many kids there. Some of them are so good that they recently competed in the national championships in India and won.

What do you feel when you act?

That’s a good question. Once I’ve done all my prep work and we start shooting on set, it sounds cliche and like a line from the film, but it really does make me feel free to have that permission to let yourself go and see where it goes. It’s like a dance; ooh, let’s just be here really, really present in the moment and let it flow.

What do you like to do for fun, when you’re not working?

During the pandemic, I was learning the guitar. My dad’s a guitar teacher as well as a musician, so I got to hang out with him a lot over Zoom. He’s been teaching me guitar, that’s been really fun. I also trained to be a yoga teacher over the pandemic, which I love. I did two training courses. I set up a class with my neighborhood and neighbors come—it’s really fun. I’m very close with my family so I spend a lot of time with them. That’s why it’s been particularly hard for me being away from them and not being able to get back home. I am definitely a very family-oriented person.

How is it being a series regular on Hollyoaks?

I loved playing Neeta so much, and I got to play her for two years. When she came in, she was a trophy wife, very bubbly and a ray of sunshine. By the end after the two years, she was full-blown having an affair, became a teaching assistant and was sleeping with a 16-year-old student, so it was a very controversial storyline. She went through all this stuff; was also in an abusive relationship with her older boyfriend. It was a challenging role, and it was amazing to get my teeth into that. Playing her is definitely something I will never forget, I loved it so much. I loved dressing like her, because it’s very different from how I dress. She’s very flamboyant, everything would be ruffled, sleeves and collars. The more the better, but also stylish at the same time. Also, being a bit clumsy and saying the wrong thing, but also with a real heart of gold. I loved that.

I’ve always been a bit urban, maybe a little bit of a tomboy but feminine as well. I’m drawn to doing different things all the time, depending on my mood. If you saw the clothes in my wardrobe, you can’t really pin down what my actual fashion sense is. [laughs] It’s mismatched, but I’m really starting to enjoy style and expressing myself through what I wear a lot more as I get older. Nowadays my motto is more —if I like it, I’m putting it on.

I’m in America and I’d absolutely love to do something in the market here. I know Netflix is a platform where you get to see all things from different cultures, which has been so great for people to get to see Skater Girl and experience rural India. I’d love to book a series regular over here, which is my next thing I’d really like to happen. Maybe a play as well.

I really hope that people enjoy Skater Girl, find it uplifting and inspiring and that the message of women supporting other women also translates. Lady London discusses her queen aesthetic, women being underestimated in rap and her upcoming EP