Toosii is about to take over the rap game. Born in Syracuse, New York but raised in Raleigh, North Carolina, real name Nau’Jour Grainger has already created his own lane in the industry at only 20 years old. His music speaks volumes to his character, touching on real-life experiences, trials and tribulations, love and heartbreak, and pushing through the trauma of coming from the trenches.

The “Love Cycle” recording artist describes himself as “the big steppa, the wear-long flexer, the girlfriend ass caresser. I’m an open book, free-spirited person. I’m a man before an artist, but an artist as well.” His unique sound combines the likes of R&B, hip-hop, and soul, with melodic trap elements that arrive in the form of street anthems for the masses to relate to. With nearly one million followers on Instagram after only rapping for a couple years, Toosii proves you really can turn your dreams into reality if you work hard, stay passionate, and remain authentic as hell to who you are.

Toosii’s most recent release, Platinum Heart, received critical acclaim not only from his growing fanbase but also cosigns from the hottest artists such as NBA Youngboy, DaBaby, and City Girls. Spearheaded by standout singles “Truth Be Told” and “Red Lights,” both of which accumulated millions of views on Youtube in a blink of an eye, the project was recently paired with a deluxe version — adding even more bangers to his catalog.

Flaunt caught up with Toosii via Zoom, who was layering his iced-out chains over his white tee: one reppin’ his label South Coast Music Group, another repping Toosii2x which stands for knowledge, wisdom, and power. He also had his adorable dog by his side, whom he got at 6 weeks old.

Growing up in Syracuse, NY what was the household like growing up?

Honestly growing up in Syracuse, there wasn’t really much around. Small town, everybody knows everybody. Everybody thinks it’s the suburbs, but really it’s one of the worst parts of New York. It was fast living and nobody to look up to. Till this day, it’s still the same way.

You moved to North Carolina at 13, when did music come into play?

When I moved to North Carolina, I fell in love with music. I really started paying attention to it. Things finally started settling down and I was still going through stuff, so I used music as a way to cope with everything I was going through.

My big brother and my dad are the reason I started music. I didn’t really have any musical influences. The people I was looking up to weren’t because of music, it’s because of who they were. People like Nipsey, anybody who was an activist in the community.

You recently released the deluxe to Platinum Heart, congrats!

I appreciate it, we went Top 20! We went Top 10 Hip Hop/Rap, #14 all genres. That’s big for me, an artist who really has no features or anything.

I was finna ask, why’d you decide to go with no features? I stand alone. I don’t want to be that artist who blew up off of a feature and that feature be the song where “alright, he’s only known because of that feature.” I couldn’t see myself being that artist. Until I set the roots for myself, I really don’t want to do any features. I have features, but never dropped them. I have features with Lil Durk, Lil Yachty, Wiz Khalifa, Tory Lanez, I have a lot.

When do you plan on dropping them?

This next album is going to have features.

life about happiness 🤍 would you rather be broke and happy than rich and depressed ..

Given the success of Platinum Heart, what’s the grind like to get to where you are now?

Honestly, it seemed fast because I’m here now. I didn’t notice stuff happening because it’s happening to me. It seems I’ve been living like this my whole life, but I haven‘t. I used to be homeless, sleeping out of a car. Now I got my 5-bedroom house, $140K car, jewelry. It hasn’t registered, it all feels fake.

When were you homeless?

Shoot, 3 or 4 years ago. We were sleeping out of a motel.

What was the turning point you would say?

When my mom was able to get back on her feet. My family stopped struggling 2 years ago. Even then, everybody did what they had to do, played their parts so we could live a better lifestyle. At this point, nobody has to ask for anything.

The “Love Cycle” record is going crazy. Who or what inspired this one?

It’s something the world could relate to. Me being the type of person that I am, I know what it’s like to be stuck inside somebody’s love cycle. Constantly want them, constantly feel like no matter what it is that they do, you always want to be with them.

Kia told me “Mercedez” is a tearjerker. What’s the deeper meaning behind this record?

“Mercedez” is based on a true story. “Mercedez” is about that college girl who lives a double life. She’s in college, but still has problems at home. Working 2 jobs: one being a waitress, another working in nightlife. That old-fashioned, hard-working female. Before the internet and OnlyFans, you had that girl who was busting her ass. Honestly, nothing wrong with Only Fans. You make your money how you make your money. “Mercedez” is about a girl who was a waitress and stripped at night, based on a true story. Based on somebody that I lost.

How does it feel to have music be an outlet?

It’s a good feeling, it helps me cope with everything I go through. Literally when I’m going through something, I sit here in front of my mic and make music.

Do you freestyle or do you write? 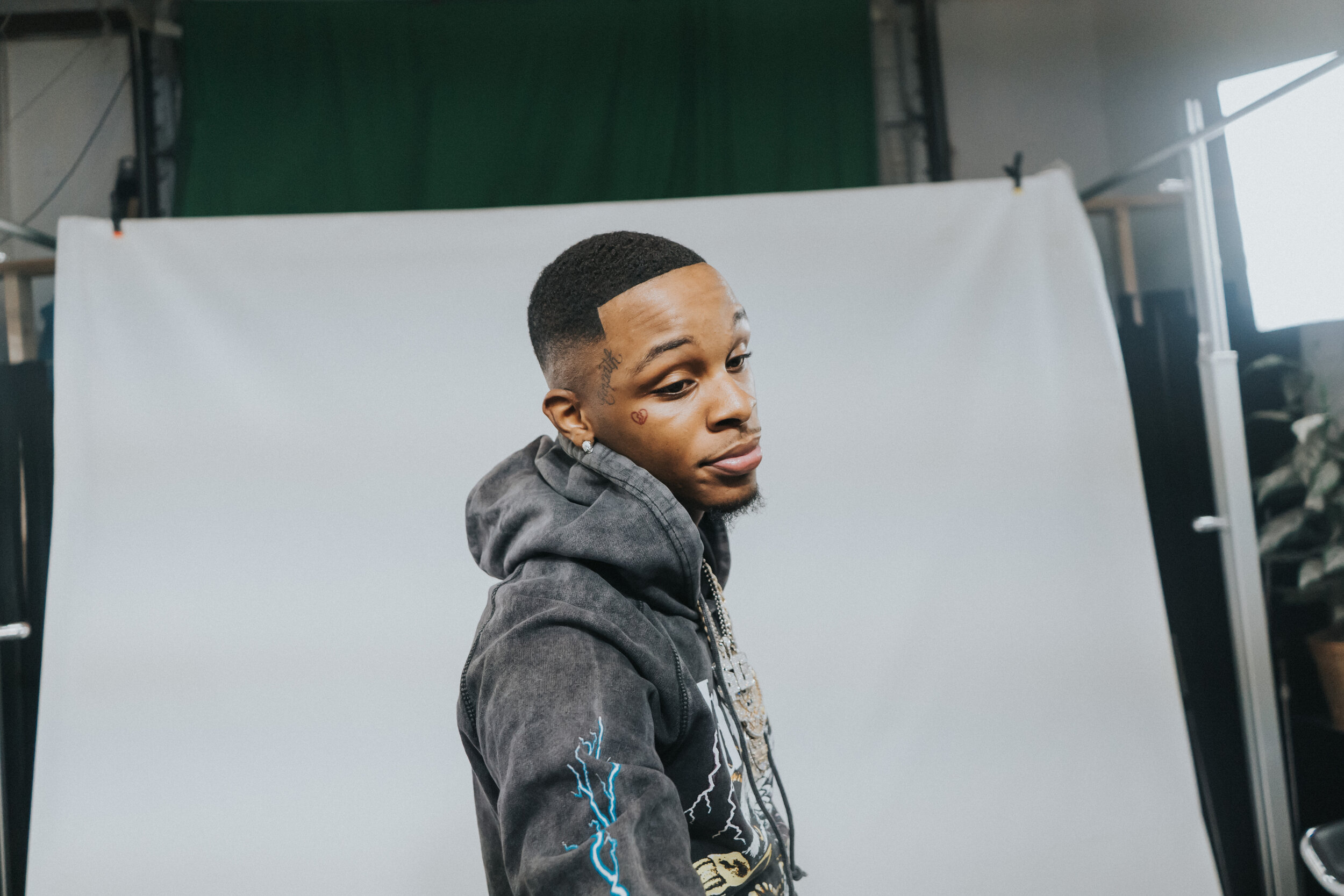 What’s the meaning behind the cover art with the actual heart?

It’s a picture of me, and a hand with a heart in front of me. Instead of putting a fake heart, I told them to put a real heart to exaggerate the situation. To show people this is real, this is serious. This is nothing to play with, these are really feelings. I truly have a platinum heart. In the background, I got a picture of my granddad. Everything I do is for my granddad.

You talk about your grandad on “Red Lights,” how did you get through that?

I come from a place where we have nothing, no motivation. “My best friends killed my granddad, I had a hard time crying.” I’ve been through so much, I’m numb to a lot of things. On the outside I’m coping with it, but deep down inside, everything’s getting thrown back in. I haven’t gotten to that point where everything I’ve been through has hit me yet, but once I go #1, that day it’ll hit me.

How’s it feel to have damn near all your videos immediately hit millions of views?

Honestly, I used to look and be like “yo, I can’t wait till my videos hit a million.” Literally a couple months later, it started happening. I was making music, started being more consistent. Consistency is key.

I’m a free spirit. On top of me being an open book, I’m goofy. I’m a Capricorn, I’m nonchalant. You know how Capricorns are, we’re really laid back but very hardworking.

I want to go #1. I want to continue to shock the world, it’s a whole world who doesn’t know me.

Why is “Got Her Own” your favorite song?

It just hit home. I love a female who’s able to do for herself, anybody who’s independent. “Got Her Own” reminds me of an independent, strong woman. No matter what ethnicity or color, what type of person you are, as long as you’re hardworking, that’s what I love. It reminds me of my mom, my mom’s a hard worker.

What’s your relationship with your mother?

That’s my best friend, I love her to death. That’s my #1 fan right there.

Honestly, I have to ask her. She’d probably say “Why You Think.” Let me call her [calls mom].

The end’s probably the funniest, I did a little MTV Cribs. You have to watch the full video, it’s funny.

Would you ever move out of North Carolina?

Any other ventures you have in the works?

I want to help the community around here, probably open a homeless shelter back in my hometown.