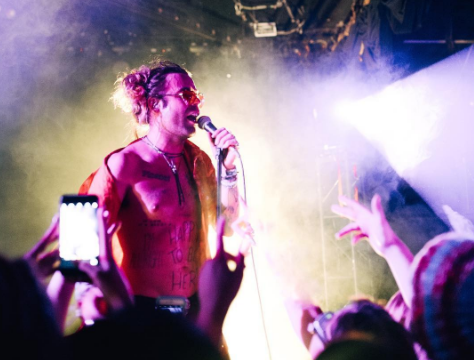 Tonight was a celebration of an artist whom I absolutely adore and treasure in my heart. If there’s one takeaway from this #FOMOblog, I hope that you are able to listen to these artists that are so much more than their music. Their story, their personality, their message. It goes beyond what you hear in the records.

Mod Sun at The Roxy on the last stop of his Drive In Movie Tour. If you’ve never heard of him, I highly encourage you to listen to his last project Movie. I was at Rostrum Records for the listening party, and just remember thinking how fucking fire it was throughout the entire evening. Mod Sun is the most positive, energetic, happy, just overall great human being. I met him when he came through DX and immediately fell in love with his personality. And he makes bangers.

i wanna be @MODSUN when i grow up. @HipHopDX pic.twitter.com/UNxcjPdiNl

Tonight, I was experimenting with this new equipment. Shout out to James and Nina for hooking ya girl up with a DX mic that plugs into my phone. Technology is a trip, you guys. They had to get me this transmitter device from the store that acted as a medium between the mic and my phone. I pull up to The Roxy well before 8pm because that was the cut-off time that Mod would be doing interviews or anything of the sort.

Huge thanks to Lisa for getting me backstage and helping put together this entire tour. She’s the best of the best. Mod Sun greeted me with so much love. It made my day. And I had a long day. We enter a very smoky room, full of all the homies. Hello, hot box. I didn’t mind at all. This drop he did had me dying. He is honestly hilarious. How can you not laugh?

While I was back there, I had the pleasure of meeting Marty Grimes, IRL. I wasn’t sure I’ve posted his music before, when I was running the music section at DX. But regardless, I found out he was from the Bay and it was automatic friendship. After charging up my cell and going through some more emails, we step out into the main room.

I had to quickly run to my car to feed the meter before his set at 9:30pm. Luckily, they understand the struggle out here and let you leave the venue to do so. When I came back, I wasn’t ready. Whoever Marty’s hype man is, salute. He had the crowd turnt the fuck up. Pretty sure everybody in that room forgot it was Monday at that point.

Marty comes out and we quickly notice how many fans were out to see him. It was dope. I knew I fucked with him from our encounter backstage. I was looking for a spot to interview Mod Sun and he said after I saw his set, I’d want to interview him. That’s a rare instance that confidence is admired.

What really blew me away: G-Eazy popping up out of nowhere. Well, I knew he was in the building when I saw his manager in the VIP section, but I didn’t think he’d come out before Mod’s set. Gerald is on 2 songs on Marty’s project Through The Smoke. I can really respect G for showing up and supporting his people. He really doesn’t have to, but he does. Salute. Marty closed his set with “Hell of a Night.”

We were all so excited for Mod Sun to grace the stage. Opening song: “We Do This Shit” featuring Dej Loaf. My jam. That’s a record that you just can’t help to smile and gig to. And then I went through hell (again). My phone ran out of storage. Worst feeling ever. Mid-video, I get a pop-up on my phone and then my phone proceeds to freeze. As much as I should have just accepted it and enjoyed the show, I was there to get coverage.

I kept turning my phone on and off. And nothing. Smh. I had to record on people’s phones and ask them to text it to me. I hated it. Mod Sun played us “Two,” at which I realize, this man is an entertainer. He put on such a great show for us. Even the visuals on stage that synced with each song he performed. Dope. This part was the best. “Stoner Girl” had “0 people died from weed” and “75,000 die from alcohol” flashing all throughout the song. Straight facts.

Mod and I actually had a little heart to heart backstage about him and his recent struggle with drugs. I told him about my own. He went public with his, telling everybody how he got caught up on this very street here in Hollywood. He told us all to stay away from drugs and proceeded to call Sunset a “giant fucking playground.” I respect him so much because he’s so fucking transparent. Listen to the record “Make Somethin’ Of Myself.” I got chills when he played it tonight.

I’m extra for this. I know lmao. But shout out to my girl Ashley for pointing this out. Didn’t tag him on purpose hoping he wouldn’t see it lmao. But yo. I had no idea they were together. Ash said they were dry humping all Coachella. No joke, just at the end of last year, G introduced us to his girlfriend at Neuehouse. Now, fucking Lana?! My mind was boggled. That’s a crazy duo right there. That girl is so fucking musically talented, and so is he. Just weird. Anyone else?

Back to our regularly scheduled program, Mod Sun saved the best for last: “Happy As Fuck,” “1970,” and G-Eazy. Gerald announced to everyone how Mod brought him on his first tour ever. Guys, G opened for Mod, years ago. How crazy is that? He told Mod he loved him to death, right there on stage. It was fucking adorable.

“Stay High” by G is a great record.

Believe me when I say I’m tired. It’s now 2am and I haven’t even showered. I literally ate on my way to The Roxy, in my whip. This shit is crazy, but I wouldn’t have it any other way. Find your passion, and don’t make any excuses. If you really love it, you’ll find a way.