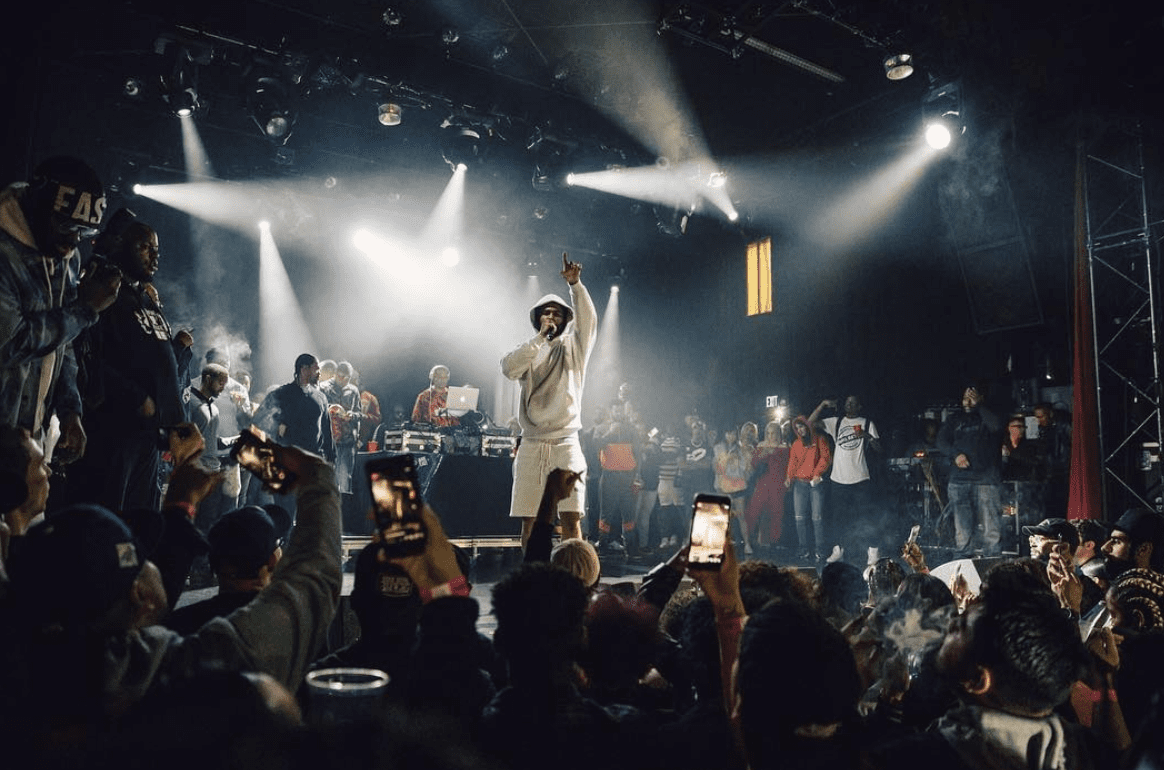 self-care is important, but so is hip hop.

Current mood. 16-hour day and counting. I woke up this morning before my alarm went off and started emailing on my phone. A lot of the people in New York — you only have their attention for so long. And that’s how my day began at 8am (it is now 1am).

just interviewed one of the hottest producers in the game @HonorableCnote 💸💸💸 @ me.

Today began with an interview with one of the sweetest producers I’ve ever had the chance of connecting with: Honorable C-Note. Salute to you. Salute to you for being a humble legend. Bangers for days. He’s responsible for A$AP Ferg’s “New Level” and my absolute favorite, “Dark Knight Dummo” by Travis Scott and Trippie Redd.

C-Note’s catalog is insane! Just peep it for yourself. And he was hilarious. Such a real ass dude and just so down-to-earth. Was so happy to connect with him IRL. Shout out to Matt for this one.

Fast forward through another long day and we’re back at the El Rey on Wilshire. Tonight was Dave East’s headlining show on his #P2Tour. I interviewed him for DX in the past, but that was on the phone. He was so sweet then and even sweeter IRL. Huge shout out to Buda, Franchize, Sonny, and Daisy for making sure I was good. Squad strong.

It’s seriously brazy how small the world is. I ended up mobbing with the homie Southside, who’s artist Lil Boii Kunta is really about to make some noise. Excited for them. Piif Jones brought him out during his set to perform “Glow,” which was super lit. I was in charge of the IG Live and was trippin’ because I didn’t wanna fuck it up lmao.

I was really pushing to meet with Dave before his set, but low key glad I didn’t because I probably wouldn’t have stayed the entire time. His set was so honestly good. He delivered for his fans and for himself. Today marks the day of his late cousin’s birthday, who is as the reason he’s even doing this rap thing. He got so emotional on stage and even cried for the first time. I honestly felt it and salute him for laying his heart on stage tonight.

Shout out to DJ Wavy, Dave’s official DJ, for getting the crowd dumb lit. It was honestly beautiful the moment Dave actually steps on stage. If you’re a female, you already know. You. Already. Know. Lmao. He’s fine as hell. He began the show with “Checc” featuring Offset which proved to be the perfect intro to the evening. That record comes off his Karma project from last year.

LA came out for Dave East — I was so happy to witness it. “How U a Gangsta” was next from the same project, and I couldn’t help but think how slept-on he is. Or maybe it’s just my friends that are asleep. Either way, he’s dope. He can genuinely spit. This tour is in light of his most recent album Paranoia 2, which I’ve been spinning religiously. I honestly love it. “Woke Up” featuring Tory Lanez was on repeat ALL WEEK, and watching him perform it tonight had me geeked.

He performed “Phone Jumpin” featuring Wiz Khalifa next, off his first Paranoia: A True Story. That’s also another thing I admire about Dave: he spits about real life shit. “Thank You” is the perfect example. He’s legit grateful for every fan he has, especially being able to get out of his situation and provide for his family. He now has a daughter who’s his entire life. You can’t knock that.

“Perfect” featuring Chris Brown is my SHIT. My. Shit.

One time for the people in the back lmao. “My Dirty Little Secret” off Paranoia is another gem. He had to sit down for this one. The crowd flocked him, but so did his people. He definitely got a squad that rides for him. He brought out Bino Rideaux for “Maintain,” which was super lit. “Type Of Time” off was also one of my favorites, off Kairi Chanel.

“Paranoia” featuring Jeezy is definitely one of his hardest joints ever. Shit was lit on stage. Next, he performed “Legendary” and “Annoying” featuring T.I. On the latter, he raps, “After we fuck, I’m unable to cuddle / Right back to the money.” Unreal lmao. Then “Maneuver” featuring French Montana — Dave has features for days.

In this moment, he shouts out his late cousin by saying “Happy birthday king.” You could just tell how much it meant to him. He proceeds to bring out a female singer named Marsha Ambrosius to help him perform “Grateful.” It was fucking beautiful, and he ended it by thanking the Lord. “Powder” was just as beautiful: “I got my daughter to raise, so I’m falling back on you hoes.”

He ended the show with “Found A Way” and revealed this was his most emotional show to date.

I wasn’t even sure I would get time with him afterward. But then we saw the line for the Meet N Greet, which meant he had no choice but to suck it up lmao. So we stayed. Shout to Stephanie for the flick, she’s the best. I had a great fucking convo with Dave. He’s the realist. 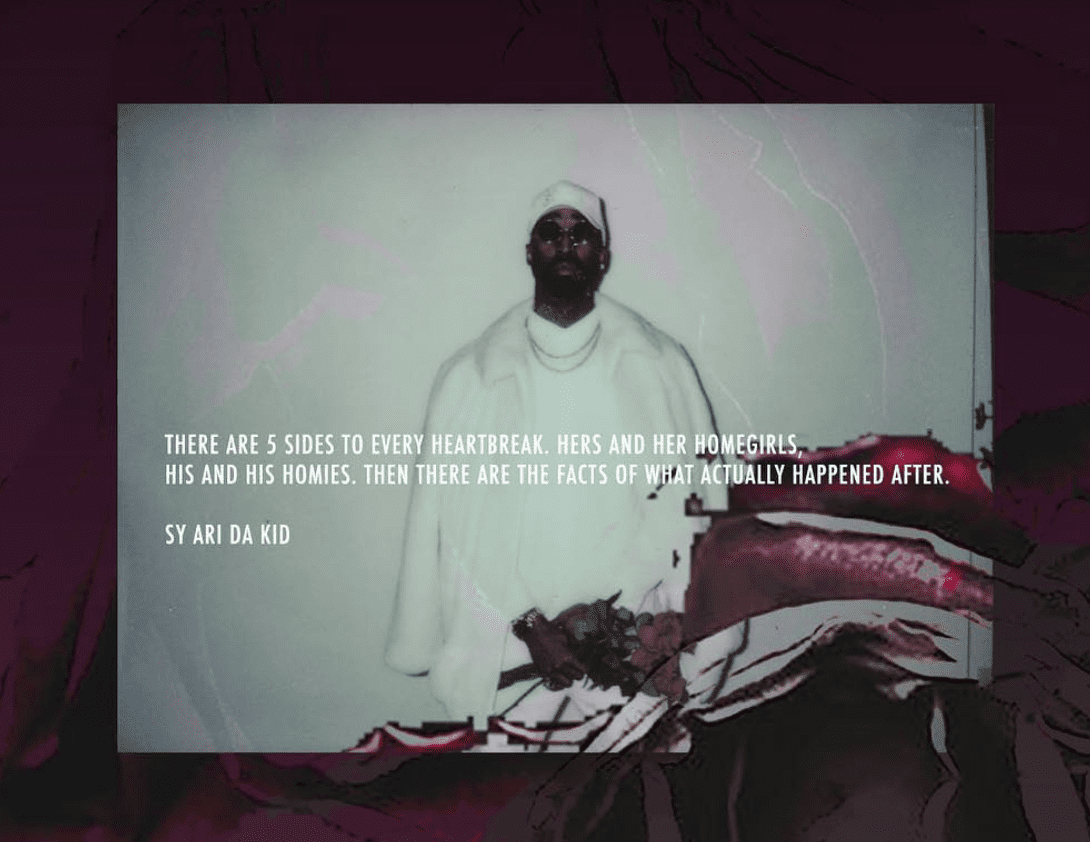